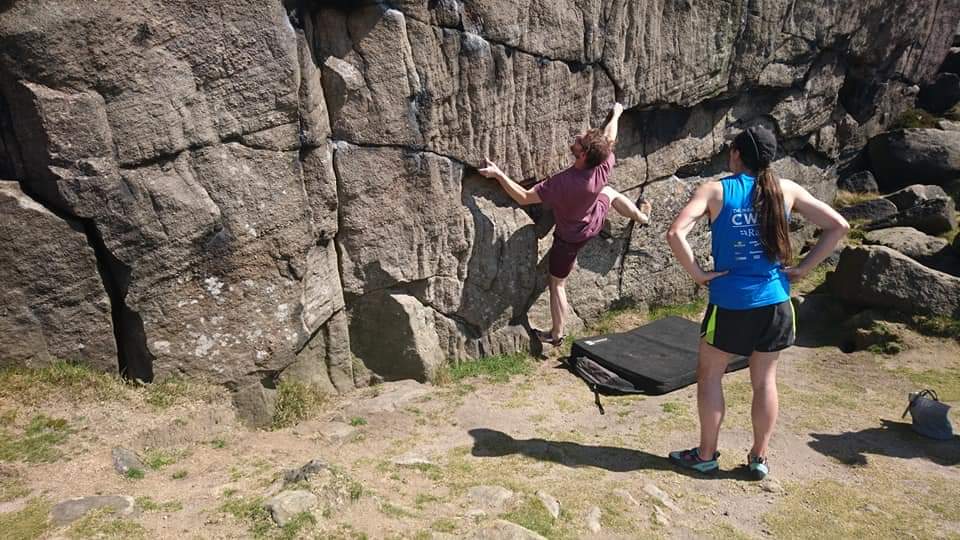 The group decided to take advantage of the lovely weather and go climbing, this time up to Higgar Tor. I decided that at about 15km from home, it would make a nice morning run, even if it is nearly a solid 450m climb all the way.

I set off a bit later than planned due to being out for a meal the night before and the necessary couple of glasses of red made getting up harder. Consequently, the first 6-7k of the run felt like very hard work! Strangely, it started to feel a bit easier as I hit the steeper, less familiar trails above Rivelin and onto the tough Lodge lane. From here it was nice running, up over to past the Sportsman Inn and on to the moors. The weather was lovely and the baked hard ground was really good fun, right until the moor above Ringinglow Road which was decidedly squidgy. Not far from here to Higgar Tor though, so pretty soon I’d finished and had found the rest of the group playing on the rocks in the sun on Higgar Tor east.

After a quick wipe down from the face wipes I’d popped in the bag I’d sent ahead, I popped some shoes on and tried to remember how to climb outdoors! It seems very odd that this is our first outdoor session of the year. Too many other things going on at weekends I suspect. The nicer weather and lighter evenings are making some post work climbing an increased possibility though.

First climb of the day was the rather lovely Tall Arête. Not particularly tough, but when you’re rusty, surprisingly easy to mess up. My first attempted was foiled by not pushing hard enough on my right leg. This meant the reach I did out right to catch the arête turned into a massive barn door swinging me off the rock and almost off the mats. Luckily Ed was awake and gave me a shove as I fell so I landed on the mat instead of the rocky ground and probably down the hill! Point of note, if you are spotting, PAY ATTENTION! 😀

Next proper go I caught the arête properly and got my feet onto the halfway break before throwing for a good hold near the top and padded up the slab. It’s actually a lovely problem fro getting your head warmed up to a bit of exposure and trusting your shoes.

After a quick look at the problem next to it, Ed declared that he wanted to go over to The Leaning Block and get working Witness The Gritness. Always up fro something a bit tougher, I went out with him and the whole group decided to join us. Once there, we bumped into a European couple (might have been German? Or Dutch? Or Belgian?) who were doing some trad climbing of The Rasp and The Rasp Direct, both of which looked fairly terrifying. Ed and I spent the rest of the day alternating between watching them climb, as we couldn’t climb Witness with them over head (risks of distracting them and them dropping rocks on us!) and trying it out.

This was the first time I’d tried Witness and to be honest, I got really nowhere! Ed had tried previously and made about 2 more moves than we managed today. I don’t know if that was just because it was warm so the primary right hand hold was not as grippy as it could be, or if we were just being a bit fat and weak :D. It might make a good project though as it’s a nice middle 7a with a really good landing between it so good for building the confidence on hard moves.

That’s pretty much it though. Just 2 problems, but a lovely afternoon in the Sun.