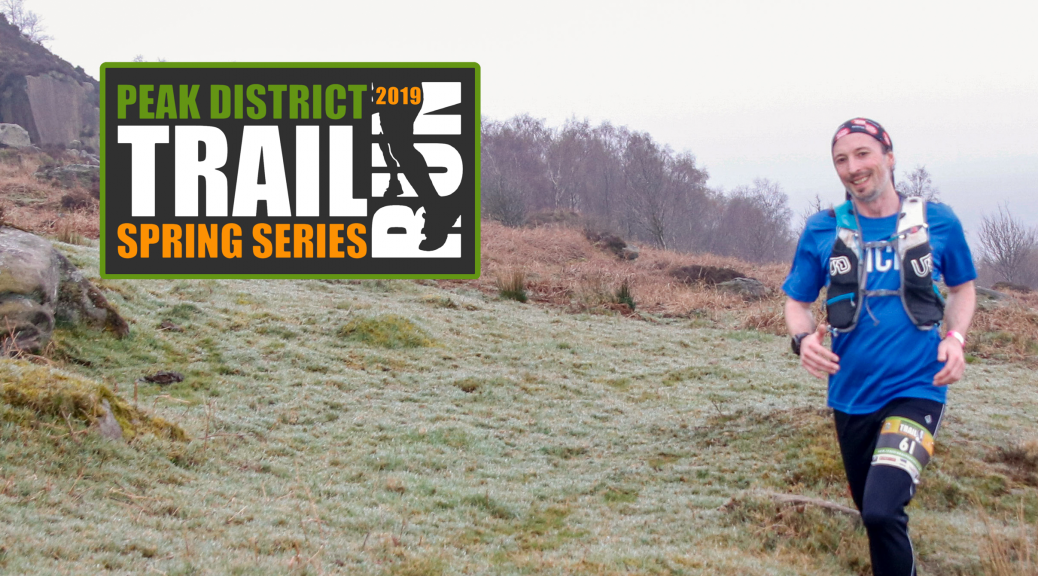 Time for round two, this time a little closer to home than Bakewell.

This race, Liz was hale and hearty and was going to run it! Yay! She was going to be accompanied by Martin (who really needs to update his blog…) as she was a bit nervous of a self navigated trail run, especially after my mishaps last time…

This meant we got a lift from Martin, which was really handy. It was only a 30 minute drive to the registration the morning, and a 5 minute walk from there to the start were we waited for 8:50 start slot to come around.

This race was a similar distance to the previous, just under 15k, but the time brackets were a little more generous with the Gold bracket finishing at 1hr 20mins. The elevation of this run was a bit different, with pretty much all the major elevation over in one long steep climb in the first half, and the second being mostly a descent. On Thursday, I had completed a recci run of the hill for the Sheffield Half marathon coming up soon, which was about the same distance and I completed in around 1hr 15mins. It wasn’t the same elevation, but was a pretty good indication to me that it hitting the time was possible…

So, we were off! The race started with 2.5k warm up over a field and following a trail through some trees next to the river. It was slightly uphill, then slightly down hill meaning I moved off at a decent clip. I was trying to keep the pace highish, but was a bit paranoid at being out the front of the group! Happily, someone over took me after about a k and slowly moved away into the distance giving me someone to hang on to a bit. Just after that, another guy passed me, but then I followed on behind at his pace for a bit before overtaking him a bit later on and staying ahead. I was a bit paranoid about pace, but I’m not sure why!

Soon, we hairpinned to the right and started a shortish climb which really showed us that the elevation meant business. This was going to be tougher than the Sheffield half hill. Soon we were back on a wooded decent again before turning left and starting the climb proper.

What followed was 2 and a half k of climbing. Mostly hard, but with the odd easier bit of hill to mix it up a bit. At this point I started to realise I’d made a mistake leaving my waterproof jacket on. It was one of those mornings when we started where it was hard to work out what you needed to wear. It was chilly stood around at the start, and I’d been perfectly comfortable with it on during the first 3-4k or so, but now I was feeling decidedly sweaty and bothered by it. However, I had momentum and didn’t want to stop! Nope! Too hot! About 500m into the hard climbing I dropped to a walk, letting the guy from earlier run ahead of me at a gate. I took off the jacket and was immediately hit by how cold it was as the wind hit my sweaty back. UGH! I figured this a good time to neck a gel, so ate it and picked the pace back up.

Just under halfway into the hill we crossed the road near Surprise View car park and headed up to run along the side of Millstone Quarry. The climbing was a bit easier here and I felt much more comfortable. We’d also started catching up with more people from the earlier groups and having people to over take always helps. We were out on the moor at this point, but a bit of it that I didn’t really recognise. Soon enough, Higgar Tor appeared ahead, looking very odd as I am usually to the east of it when out here, not directly south! At this point I could hear a couple of people pushing really hard behind me so stepped aside to let them pass. One of the guys to over take me turned out to be Andy Harding in his bright yellow jacket who won the first race in the series with a scary 1:01:50! I’m betting he didn’t go wrong at the first arrow…. 😀 I didn’t even try to keep up with them!

Soon we started swinging east/to the right and I realised that we’d topped the hill, checking the elevation map on my watch to confirm. Now I could try and open up and make the time back… except it got boggy! All of the sudden I was getting my feet wet! I was catching up on a lady runner ahead who delicately stepped around a bog. Plop, I went through it, ended up knee deep in mud. Yay! Fun times.

The steep decent down in front of Carl Wark to the humpback bridge over Burbage Brook was fantastic fun. I was getting a good pace in, overtaking a bunch of people and starting to feel pretty good. I had two guys ahead of me and I attempted to over take them on the left. As I did, they both swung right, following the trail through the broken ground. This meant I lost the path completely, stepping off it into a boggy puddle, my feet hitting uneven ground at the bottom meaning they slid forward and I fell right onto my arse in the bog. The guys I was over taking spotted it, called out if I was ok, but I’d already bounced back up, one step forward leaving me over my knees in black water, but the next step got me back on the path a good 5-10 metres ahead of them. “Short cut! I yelled back”, a bit tongue in cheek, but the fall hadn’t hurt at all due to the mud. It just left me… damp!

Over the bridge, and a short climb up to Duke’s Drive we finally had some easy fast running to the A6187 road crossing and the feed station. My full on pace was interrupted by a bit of human traffic on the approach to the feed station, but being as I needed to dib in, was probably better for me in the long run. I dibbed, and ran on, not stopping for water or food. (I had some with me) and I crossed and started the drop down to Padley Gorge. This was another fast decent, not quite as fast as I expected though due to the roughness of the terrain. It wasn’t bad, but certainly not the sub 4:00min/k I was hoping for in small bursts to make time back.

Another road crossing, this time with a small climb and steps leading up to it which dropped me to walking, and an ice van. Luckily it was empty so I wasn’t tempted and could push straight on. Now it was lovely running through Yarncliffe wood, mostly flat or downhill with the odd little spiky hill to wake the calves up a touch. We have one hill climb to go after a slightly tricky 800m or so downhill that was really tough, starting to feel really tired by this point. The path also forked with the arrows not super clear on the right way, but another arrow a few meters on made it clear; up the bloody hill!

It was only about 300m though and from here it was a glorious long downhill of about 1400m. Again, it wasn’t quite as I was hoping when I looked at the elevation graph. I was pushing hard but the ground was too rough for me to really let go, so I was constantly holding my self back. At one point though, someone came barrelling past me at a speed and technical ability I was green with envy at. How could they downhill like that over this ground? Where do I learn that?! 🙂 I grabbed him after the finish and let him know I was impressed!

The hill flattened out becoming more even meaning I could put on a strong fast finish, and gloriously, over took a Sheffield Strider right at the end. Yay!

Race Face! Just wiggled into the gold bracket for the #darkandwhiteevents #springtrailseries round two at #grindleford in the #peakdistrict. Mud! Hills! Technical downhills! Ice cream! We've got them all! #trailrunning #running

I dibbed in and stopped the watch….. 1:19:18! OMG, could I have just snuck in under the gold barrier? Knowing better than to depend on the watch result, I wandered back towards the registration to get my time, pausing on route to compliment the young speed goat. I got my timesheets, grabbed some sausage rolls and a cuppa and sat in the sun to look at it: 1:19:21! I’d done it!

I pottered slowly back to the finish to wait for Martin and Liz to coming and ended up stood with Andy Harding (the fast guy who won the last race). It sounded like the guy he was following when they over took me managed to hold him off and took first place. It would be nice to be at the sharp end, but I bet it hurts!

Soon Liz and Martin finished, with Liz, just like me, sneaking into the silver category which she was pretty happy with.

So, round one and two done. The series appears to be a two best results out of three, so I still have a change to place ok! The official standings have me in 8th right now. Although I still don’t think I could have got gold in Bakwell, taking 10mins off my time (for the going wrong bit!) would have put me at about 5th in my age category. I think I might have been 4-5th place in the standings in that scenario. Looks like I’ve got it all to run for in the next one!

Want to see a video preview of the course?