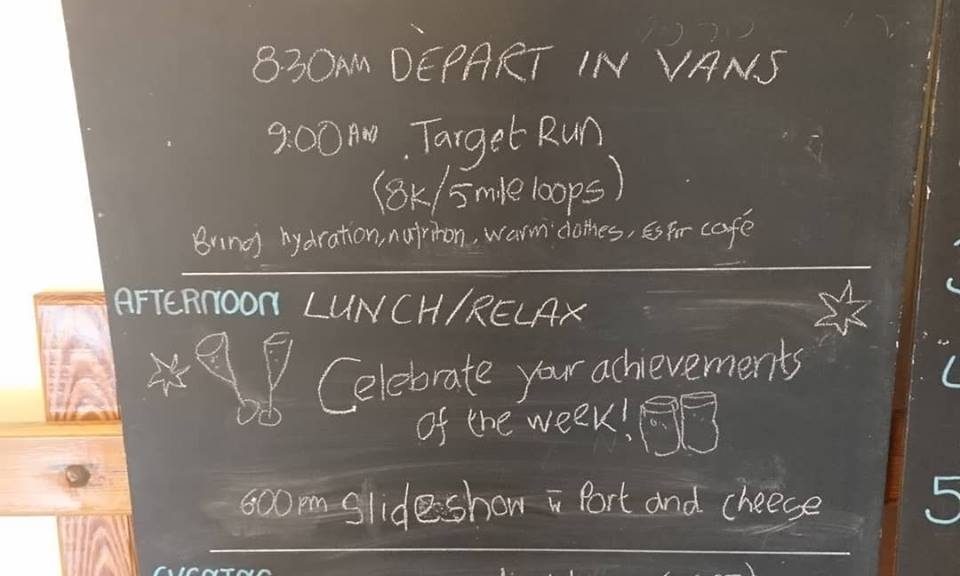 The last day of running in what has been a fairly full on little holiday. Starting from Saturday when we arrived I’ve done around 75k and it’s not finished yet!

Today is the Lagos Town targeted run. It’s a 5mile/8k figure of 8 loop, with an aid station in the middle of it. This means you can do any number of full or partial laps and be supported for whatever you’re aiming for. The coaches work with you to take account of what you’ve got coming up to create a target for you, which should demonstrate where you’re at after the holiday.

As I’d blown out my recovery a bit with my full on return leg on the Luz to Burgau coastal trail yesterday I wasn’t too fired up for a particular plan. After listening to Neil talk Liz through her plan for the run, I realised that I had a similar issue to her: I needed to get a long run under my belt around all these race I’ve got coming up to remind myself what running >21k was like. I’ve got the White Peak Trail run in May which is 26k and I’ve not been up at that distance for a while. I’ve also signed up for the Sheffield Half Marathon in a couple of weeks, so getting some distance in will be good for confidence. So, I decided to go with 3 laps, 24k. That should do it!

The start of my run wasn’t exactly straight forward though. I’d opted to run with my music on to pass the time a little, but the sound was only coming out of one headphone. What a time for the port to fail. While everyone else set off on the run, I abandoned the player and set off following them a bit from behind. That doesn’t matter though, we are all running our own runs. Next technological problem: on the little warm up we did, I noticed my Garmin was slow to pick up my HRM strap. My plan for the 3 laps was to do them easy, so stay in zone 1, but I noticed my heart rate was climbing unexpectedly. I slowed a bit, watching my HR and saw it climb past 160, 170, 180… eh? I was definitely not working that hard! Then I realised that my strap hadn’t been picked up properly and it was instead using my wrist monitor (which is officially shite). While running, I popped off the strap, moistened the sensors put it back on again, and eventually stopped completely at the turnaround point at just under 1/4 of a lap to try and disconnect and reconnect the strap. Nope. Dead! Probably out of batteries. Nightmare.

I tightened my watch on, hoping that it would do a better than usual job, and switched the screen away from the HR rate, instead just going with average page, aiming to ignore the HR now. A few km later I sneaked a look at it: 207bpm. Really? ffs.

I gave up on the low zone idea. To be honest, I’d been toying originally with going a slow first lap and faster/tempo second lap anyway, so decided to instead see if I could comfortably negative split the run. Right, new plan.

On the climb up the hill on the 2nd half of the first lap, I caught up with Caroline and ran with her a bit. She wasn’t 100% sure of the route so quizzed her to make sure she knew it (she did) and then left her to it pushing up to the top of the course. I was careful to keep the downhill nice and steady on that first lap and stopped off at the aid station for my first gel and some water.

2nd lap, I upped the pace a little and felt pretty comfortable, right up to the top of the course again where my problematic right foot suddenly crunched at me and started hurting. Bloody thing! I’m not really sure what’s going on with it, but it just complains sometimes. I stopped and gave it a bit of a wiggle and a talking to and set back off. It hurt for a bit, but faded away eventually as usual. The downhill at the end of the 2nd lap threatened to drag me a bit faster, but I resisted it, the headwind helping a bit. At the aid station I took an opportunity to apply some more bodyglide as the warmth was making things a bit chafey up front! Eek!

3rd lap! This time I focused on keeping below 5mins/km for most of it which felt great. It was good to see people finishing their runs with big smiles as I passed the aid station at the half way point on the lap. On the final downhill I finally let the hill do it’s work and pick up the pace to sub 4min/km. I didn’t want to stop at the aid station which was the end of the lap, instead finishing the hill and letting the return to flat decelerate me.

I turned back and trotted up the hill to see all the smiles and congrats and then grabbed my water and set off to find Liz. She’d targeted herself with a half marathon distance and was just completing her 2 and a 1/2 laps. She needed to grab a couple more k to finish the distance so I swapped my drink for hers and ran with her as she finished it (with a new half marathon PB! Go Liz!) Once done, we did a bit of a cool down walk/jog and finished back at the aid station just in time to see Rachel finish her 22mile marathon training run.

That’s all the running done. Warm ups and cooldowns included, that makes over 103km ran over the last week. Wow.