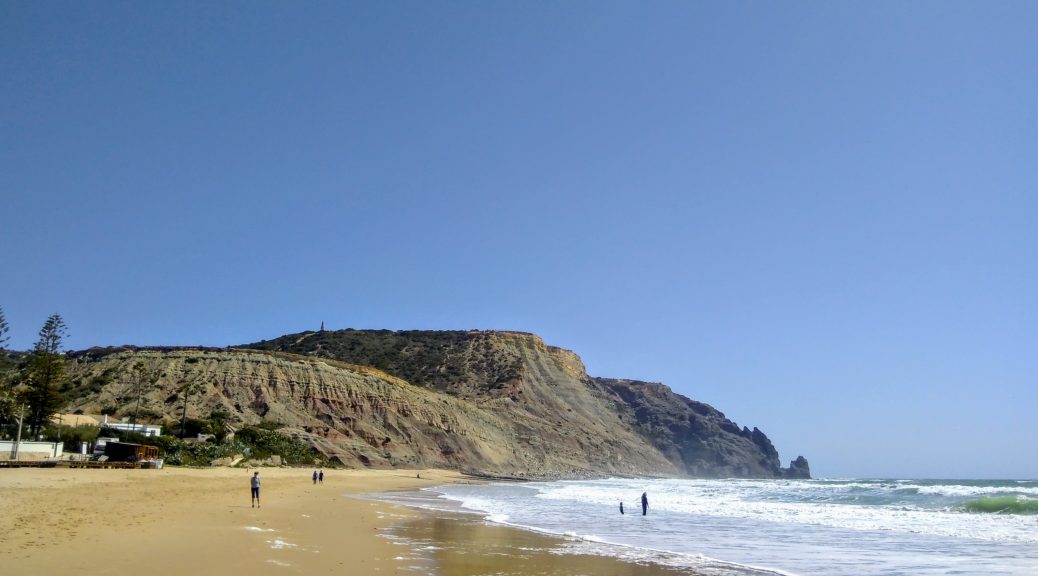 All the hard week over the week has been done. We’ve done endurance in the woods, speed on the track and strength on the hills. Today was purely about a beautiful, coastal run along bright red clay trail between two little seaside beach villages, Luz and Burgau.

This run is super high on my list of all time favourites. The trail is technical enough to be interesting, but not a pain in the arse, long enough to be a decent run (5k out and back) and includes a mini-mountain to scramble up and down if you fancy it.

It’s very much meant to be a gentler run to help our bodies recover from the week before the ‘targeted’ run tomorrow.

However, I can’t just trot this one. It’s far too fun. So, the run out was a gentler one with Liz trekking in the sight and the sounds of the sea. Returning was a different matter though!

I headed out on the way back drafting along behind Coach Chris. A significant headwind had sprung up making getting the pace up a challenge but pushing hard into it I managed to keep the pace close to where I wanted it. With that headwind and the terrain my 5k pace was never happening, but it was close enough.

Chris stopped to take some photos letting me feel the fully extent of the wind, ick, but it was helping to keep me cool in the sun. Soon I was back on the mini mountain, running half, and finishing with a fast walk with hands on my knees and descended the other side with a zigzag slalom to try and control the pace and get my breathing back under control. That side of the hill was much worse underfoot so opted to recover than to try and push hard down it.

The rest of the run flew by with only a couple of pauses: one where I checked if I was correct to head away from the sea (I was, as the path to the right disappeared into a mini cove) and the other where running through a rain riven gully surrounded by 6″ grass I almost fell over a massive dog, perhaps hiding from the sun!

Soon enough I’d left the trail and was on the last stretch of about a k on the cobbled streets of Luz and out onto the promenade and the finish.

Just shy of 10k, I’d managed the return 5k in just over 23 minutes, cutting around 2 minutes off my previous attempt. Happy with that! I wonder what I’ve left in my legs for tomorrow though?