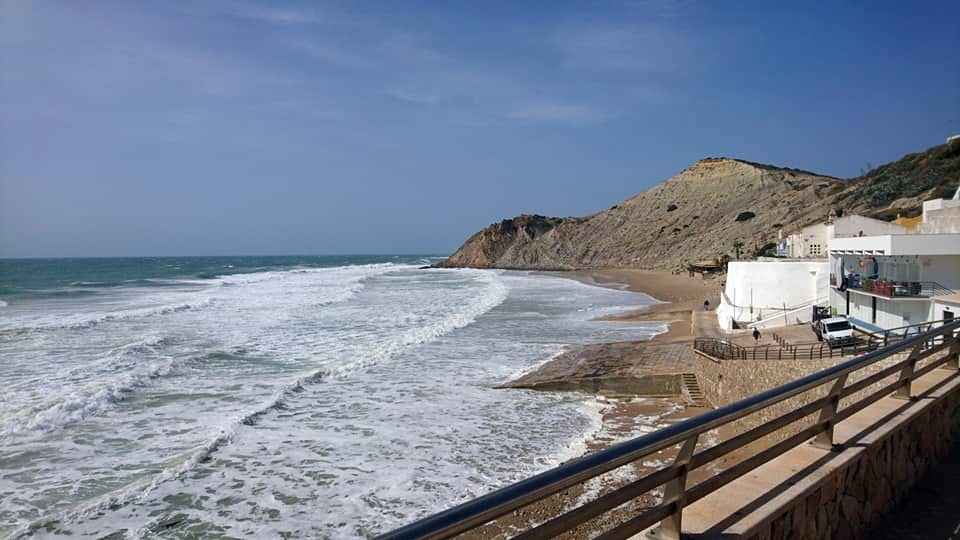 Today was Hell On The Hills which is everything as tough as it sounds! Seven hill reps in the sun and then a steady climb up the Punisher, a 20% hill out near Praia da Boca do Rio a tiny little gorgeous looking beach roughly halfway between Lagos and Sagres.

We were lucky to have the sun back this morning, with temperature around the 20 mark, but a strong wind was coming up off the coast, making the sea look pretty impressive, but possibly making today’s work more difficult.

After a warm up jog we started out on the repeats. Each rep was roughly 1k, 100m on a flat, 400m-ish on a steep gravely track, curving to the right before turning around a set of cones and returning to the start. It’s always hard to work out how fast to be pushing on this sorts of things, the pace is kinda useless and instead you’ve got to go on feel.
I’d decided to hit the lap button at the start and top of each rep, so I could compare up and down paces and this is what I came up with:

With the exception of the first lap (always quicker!) and weirdly lap 3 (over excited?) I seemed to have held a decent pace, right up to the last one. Obviously over-cooked it just a little bit. The thing you can’t see in the data is that I’d completely lost track of how many reps I’d done. I was working too hard to be able to work out that lap 10 appearing when I hit the button was referring to the completion of the 5th downhill, rather than the number of the next lap, so got completely confused thinking I’d accidentally pressed the lap button twice. Suddenly I had no idea how many laps I had left. Uh oh!

I was planning on doing the last downhill quickly, but I realised I could see ahead that Stuart (the front runner) had gone past the turnaround point and was heading for the final section: The Punisher! Dan, who I’d been tracking just behind the whole time also passed the turn around as I got to the bottom of the hill so I decided either they’d both got it wrong or they’d somehow lapped me and I hadn’t noticed.

Trusting them, it was Punisher time. The Punisher starts ok, but as it curves around the bend to the right you start to see the gradient ramp up. It boils down to a mind over matter moment; just keep the legs moving, keep going up. Thankfully, once you’ve turned that corner, you can see the top, so you see the support up there willing you up, and you know there isn’t a nasty false summit surprise to come. On my last trip, we weren’t able to do the Punisher as there was a pack of wild dogs running around up there, so I had a bit of unfinished business, and happily I knocked a hefty 48 seconds off my last attempt (which is almost a quarter of the time I took to run it the first time!)

After a sports massage which seemed to have helped my really sore lower back, we headed out for another recovery run, this time 3kish around the local paths just above the beaches here, before we had BBQ for tea and a game of Killer on the pool table.