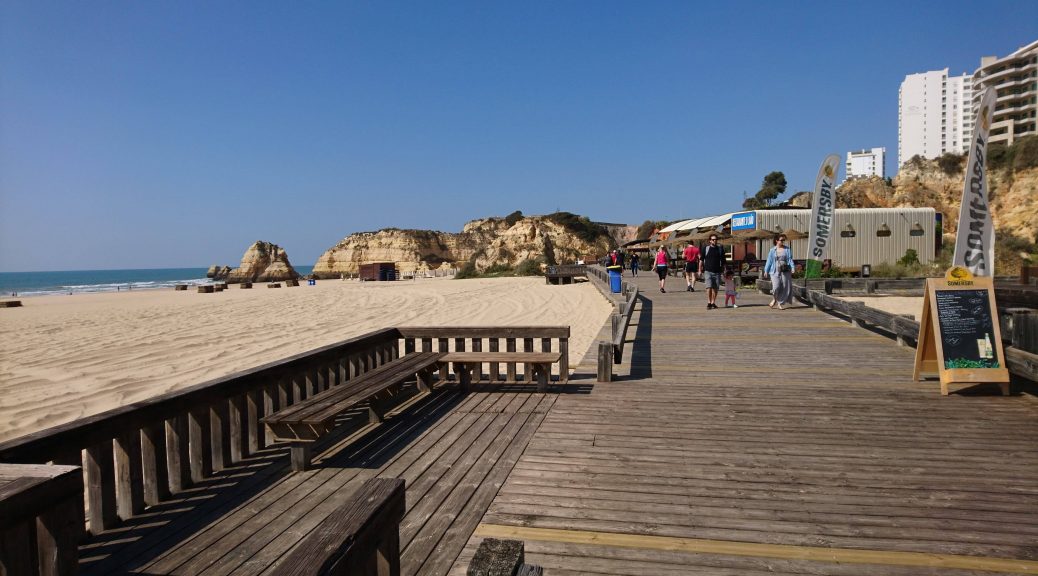 I’m out in Portugal on another Embrace Sports running holiday. I’ve been out here twice before, but never managed to really write about it beyond the odd mention in summary posts. Let’s see if I can do the holiday a bit of justice.

Liz and I flew out yesterday (Saturday) after a pretty over crowded train journey to Manchester airport. Why can’t Virgin trains get their act together so getting to the airport with luggage isn’t a complete nightmare? The train was so packed I had to carry my 20kg case over my head to get it down the carriage to our seats. There was no luggage space at all, so we had to hold it on the table for most of the trip. Still we survived and after a rowdy Ryan Air flight (A stag do and a hen do…) got into Faro airport at about 16:15.

Timings of trains and planes from the North usually mean that we miss out on the first run of the holiday. It’s usually a gentle “get the plane out of your legs” 5k along some cliff top paths to the lighthouse above Lagos, but this time we got lucky and a special one was put on for the small group of us on the later flights.

It was supposed to be at a gentle pace, but the main pack was a bit quicker than Liz was comfortable on her first outing, so I hung back with her and we had a lovely run out as the sun set around the new golf course and a on a new set of wooden walkways they’ve added around them. Not quite the same as the dirt trails but probably a lot better for the erosion!

We got back just as it was turning dark and had enough time for a shower and a beer before we settled down to a huge meal of grilled chicken breasts, a massive vegetable lasagne and some rather potent home made garlic bread while Neil welcomed us and gave us the introduction to the week.

We stayed up a little bit after the meal for some chatting, but soon headed to bed for some shuteye so we were ready for the first of the weeks workouts.

This morning we were taken out by minibus to Portimao where we’d be doing mile reps along the boardwalk at the side of the beach. We lucked out with the weather, nice and clear with a reasonably gentle breeze to keep us cool…ish! It certainly heated up during the reps. As we arrived we were treated to the sight of lots of cyclists as there appeared to be a triathlon about to start. This changed the plan a little, meaning the mile was out and back along the boardwalk rather than the full length, but this wasn’t a problem really.

This year, I was placed in the faster group; usually I’d be in the second, but we’ve a bit of a smaller group this time. Setting out for the first rep, the pace was pretty fast and I spotted that I’d been sucked along with it quickly and backed it off a bit. Rach and I hung at the back for the first rep, keeping the pace to around my 10k pace and that seems to work (was possibly a bit quicker than that on reflection). 70 seconds of recovery and off we went again. I’m pretty happy with my splits actually keeping the pace almost bang on where I wanted it to be for all 4 reps (4:02mins/km, 4:01mins/km, 4:01mins/km, 4:03mins/km) and I finished feeling pretty good. A short cool down later and we went to the cafe right at the end of the Boardwalk for some coffee and a relax.

In a couple of hours we’ve a 5k recovery run to loosen the legs off down to the marina in Lagos and back and then dinner! Tomorrow we are off on a longer “endurance” run. This one is one of my favourites so I’m looking forward to it!

One thought on “EMBRACE! Portugal Running.”