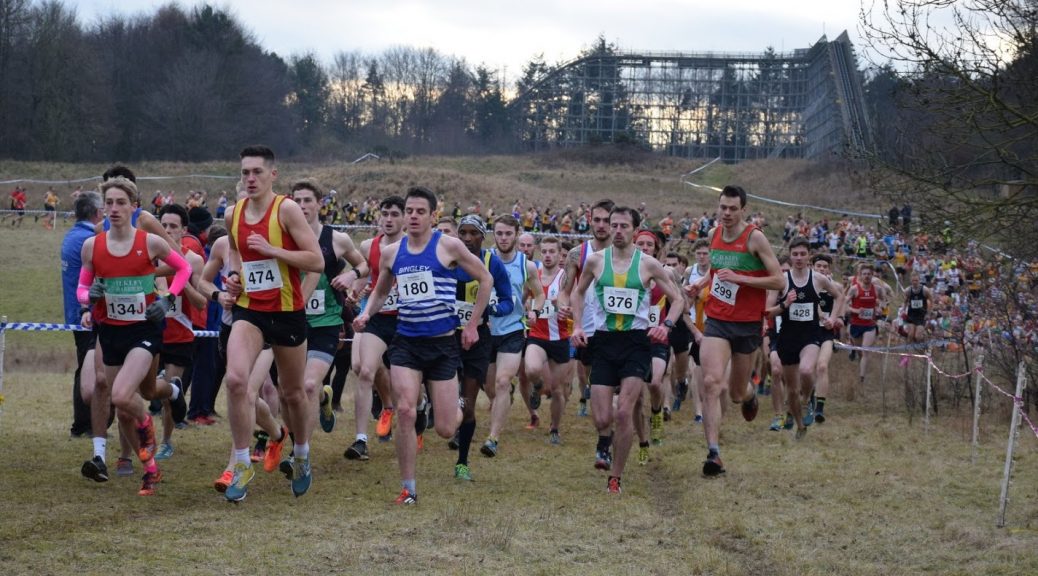 (picture from http://woodentops.org.uk/. Original can be seen here)

My first race of the year for Sheffield Running Club was up at Ripon at Lightwater Valley Park which makes an interesting venue for a race! Setting off at 9:30ish, we got there just before 11 and with the Mens race not starting till after 2pm, we had quite a bit of time to kill!

The course was on a field entirely inside the tracks of “The Ultimate” the big roller coaster, with the finish line right at the dramatic looking highest point. It was quite surreal to be honest, but made a good backdrop for the run when you had the spare energy to take a look.

The ground was pretty firm, which was a bit of a relief for me after the tales I was being told of some horrific sounding years previously from the rest of the runners and to be honest I probably didn’t need the new cross country shoes I’ve picked up a couple of days before (but at only £20, I can’t really complain!) Still, I need to get used to them for the wetter days, and it was an experience!

The route was actually bloody complicated, and if you can make sense of this set of instructions, you’re better at this than me!

It was supposed to be one “short lap” and “4 long laps” to complete the 10.3k for the circuit, but because the short lap was effectively a partial but tweaked long lap it got really confusing. Before I knew it, I was passing the finish again for the start of the long lap, but I only realised I’d done that at the start of my 2nd long lap! By the time I was in my 3rd lap, I think, I’d completely lost track of where I was.

Luckily, anticipating something like this, I’d flipped a screen on my watch to show me overall distance covered, something I usually don’t have on there, meaning I know roughly what I had left to go.

Race wise, I wasn’t sure how fast to run it. I’d done quite a lot of distance up to this point having run every day for the past 14 days so was pretty tired and I was also aware that my pace really wasn’t where I usually expect it to be. Based on that, plus wearing new shoes, I decided to try and take it easier early one, and then try and pick the pace up. This seemed to work for a bit and I got some satisfaction in slowing running down the people ahead of me (especially on the short but very steep little hill through the trees in section g which seems to stop everyone else in front of me in their tracks!) but by probably the mid way through the 3rd lap I realised I’d over cooked it a bit and was starting to struggle. 8k looks particularly off pace!

Eventually it was the last corner and my watch showing nearly 10k meant I must be on the final straight and found the finish line and headed towards it. As it funnelled away from the rest of the course I started to get paranoid though. My watch wasn’t showing 10k yet, just under, and the finish like was about 20 meters away…. I was missing 300 metres! Have I messed up?

I couldn’t have, because the guy I’d been chasing for the last 2 laps was still ahead of me, unless he went wrong too? PARANOIA!

Looking at the Strava recording, I’m guessing my GPS just under-recorded. There isn’t any way I could have missed/skipped a bit to miss out the last 300 metres, but I did spent 10 minutes of so after finished expecting some official to drag me off and disqualify me!

Final time: 44:12 which will do. It’s a long way off the < 41mins I’m expecting of myself for 10ks at the minute, but it is cross country, with new shoes, and I’m feeling pretty knackered and not fit at the minute!