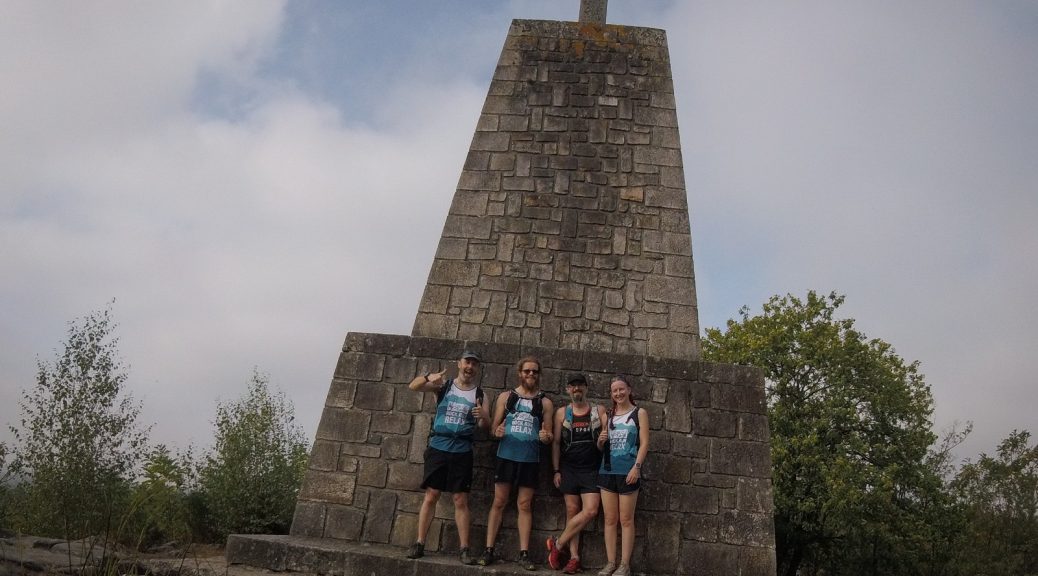 Ah the rest day.  Do you remember what happened last year?   Well, Martin, Andy and Liz really fancied checking out the Circuit des 25 Bosses after my stories from last time, so that become the aim for the day.

Something went a bit wrong in the planning though.  I’d done it before and so I was expecting it to take is 3-4 hours for the 14km.  Everyone else though was just looking at the distance and thinking it would be 2 to 2 and a half hours.   I was a little confused when people were talking about setting off a bit earlier to avoid it getting too warm.  Too warm?  When are you planning on setting out?   Then the next day, people didn’t really have breakfast, instead just had a banana.  Ok!

Luckily, everyone brought a good load of water.  I’d have probably spoken up if I’d have noticed a lack there.

Either way, the plan was done and we set off at about 10ish.  In another bit of good fortune, we’d decided to drive to the car park just past Croix St-Jérôme instead of running the extra couple of km from the gite.  This was a bit of a leg saver in the end.

Everyone was pretty chipper as we turned left and started the climb up to the first boss.  We ran for probably about half of the climb before stopping (probably what I did when I first ran it) and I think then it started to sink in how tough this was going to be is this was the first of 25 hills!

We got to the top smiling and checked out the view.   The humidity was really high so we had a bit of a mist accumulating above the trees giving everything a soft focus, but the view was still tremendous.

A few more ups and downs later we found the Monument de la Résistance which I promptly climbed up and mantled onto.  Probably not an acceptable thing to do looking back, but it was a great view.   We got a couple of photos, including playing with the GoPro Andy was carrying and it’s voice activated features to take photos.  (See the featured image at the top!)

After a moment to work out how to get off the monument, we descended off the top and back onto the circuit and continued on our way.  Things were going as expected to be honest when on the top of around bosse 5, we ran into an older fellow coming the other way.  He started talking at us in French and then swapped to English when he realised we weren’t native speakers.   At first I thought he was telling us off for something we’d done (drifting off the path or something?) but it turned out he was asking us if we were running along the circuit.  He got rather animated then and it turned out that he was a member of the association who maintained the markers and did some of the ecological preservation of the hills sides.   Feeling pretty lucky and privileged that we got to meet them he all of a sudden turned around and started running along the trail beckoning us to follow him.  Just like last year, I’d ended up with a guide!

Patrick ran with us for a good way, from around boss 5 to 19 I think.  He was a fantastic runner and at over 70 years old was as sure-foot as a goat across the rocky terrain.   He seemed to delight in pointing out all the different areas we could see from the view points, showing us which markers he’s refreshed recently, and even more specially, taking us to a bunch of the hidden bivouacs with brick walls built under natural blocks and small caves filled with ancient carvings.   I’m not sure you could have paid for a guide like this!

Patrick dragged us along probably a little bit too fast than was comfortable for Liz, plus all the little deviations we’d taken to look at interesting things pushed the time and distance further and further out, meaning we needed to send a message or two back to the rest of the group in the gite that we might quite a bit later than expected.

Eventually we came to the point when Patrick needed to leave us and after short goodbye and thank you he headed off.  We all then took a few minutes to rest and recover a bit before starting up.

The last quarter of the circuit does feel a bit harder than the rest.   The ascents and descents are more tricky with a lot more erosion making the footwork need a lot more awareness and careful thinking.   By this point people were running out of water (Liz having drunk a whole litre already!) and starting to struggle so there was quite a bit of walking on the less flat sections, but we were on the home straight now.

At around bosse 22 we had a surprise.  We’d just finished the descent off the last bosse when we heard a  familiar “Hellooo!!!”.  It was Jim and Lolly working on a rather hard problem at Rocher de Jean des Vignes.  What are the odds eh?  We had a brief chat but the end was in sight so pushed on.

The last two bosses included the infamous exposed mantle-shelf on to the top which Liz needed a bit of prep time before doing.  This was horrendous on my previous attempt as the rock was under a torrent of water from the rather intense rainstorm happening at the time.   Then we just had a tough decent down the last bosse before finding ourselves back at the start.

Everyone finished with smiles on their faces (which is more than can be said than a couple of k ago) and our GPS watches seemed to suggest we’d done more like 17k than 14k!

A quick drive back and we all collapsed for water and some salty snacks outside the gite.   Taking our shoes off revealed some interesting dirt lines…