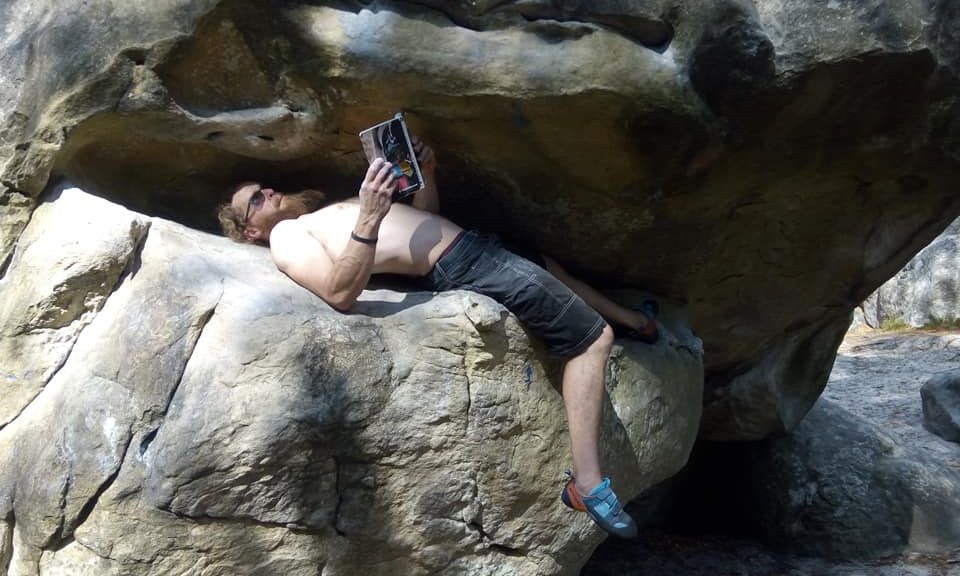 When in Font, we tend to follow the same pattern.  This means day 4 is our last day before a rest day to give the fingers and toes some time to recover from the torture of climbing shoes.  This means it’s usually an attempt to squeeze in as much quality climbing as possible.

By now I’m usually really struggling with my feet, but a combination of being much more careful with taking my shoes off (well, pulling my heel out of the shoe to take the pressure off the toes) and also using some of my Westfield benefit to get Elitefeet to really trim my toenails nice and short before heading out seems to have helped a bit.   Good beta for next time I think.

We’d selected Rocher du Potala as our site for the day.  Again this is somewhere I’ve never been before, although Liz, Ceri and Martin went last year and came back very enthusiastic so I was quite looking forward to it.

After finding a spot in the middle to leave our gear, Andy, Jim, Lolly and I headed back to the start of the circuit and started ticking them on.  After going yellow and orange 1, 2 and 3, I took at look at Blue 1, which was a nice looking wall and then follow Jim up.  Jim made it look pretty easy in his approach shoes, and I faffed my way up, finding the top out harder than expected due to all the holds being “the wrong way round”.  Still done, and flash!

Next we did the even taller blue two, which was a beautiful looking wall with a bunch of deep cracks in it.  Sadly my top out was significantly less beautiful as my arms really didn’t want to mantle the top so I deliberately walrused the top with a bit of a belly flop.

It was the start of a good day.  I ticked off most of the blues I tried and without too much pain.   After blue 10, Jim suggested a project problem for me:  Acid, a rather mean looking overhanging triangular boulder.  After a bit of playing around behind it on the aptly named Crimp like fuck.  Getting nowhere on that, mostly because I didn’t want to pull hard, I decided to have a go on Acid and pulled my mat over.

Acid is a sit start problem, with hands starting on the sloping right hand side.  You pull on, whack on a heel and traverse up the edge to the top before escaping over the right hand side.   My first attempt was pathetic, completely unable to lift off he ground at all.  By this point Jim had moved his bouldering mat over from where he was having a snooze (rest day for him and his skin!) to come and watch so now the pressure was on!    Second attempt I lifted off the ground, tried to slap a heel on and then pinged off to land off the matt and on the ground hurting my bum.  Doh.

I had a few more goes, but never lifted off the ground again and gave it up as a bit of a bad job.  The rock had been sat in the sun for quite a while so was pretty warm and that didn’t help, so I left it till later once it had cooled down.

After my attempt at Acid was done, I didn’t get that much else done for a bit.   There were a couple more blues I finished off, but really couldn’t get anywhere on the tricky Asterix which was a strange blue scoop that required some delicate footwork on a very slippery polished ledge and a high left foot I was just incapable of.

Starting to feel a little grumpy with myself, I went for a wander to find Liz who was pottering around a bit trying find something she could get on on her own and joined her.  We tried a couple of blues without too much enthusiasm, and then starting trying oranges with a little more success.  Eventually we made it to the section of Rocher du Potala with some very large square blocks, one of which has a bivouac underneath.   I spotted a rather good looking orange up the flat side of one of the boulders with one of those typical sharp shards of quartz on it.  Climbing that led to the next problem which needed you to climb off the side of the boulder,  not quite to the floor and then traverse left along its side before ascending it again.  Quite easy to get stuck in a loop!

At this point I’d realised that the sun had dropped a bit so thought I’d go back to Acid and give it another try.  I wandered over, set the mat out carefully covering the place I grounded out arse first last time and started contemplating it.  After a few pulls which didn’t really see my bum lift of the mat much I laid back on the mat and had a mini snooze while contemplating how to do it.   Meanwhile Ceri wondered over and I asked her to find me a chalk bag and brush.  She happily obliged and then sat up on a rock to chill and watch while I get it a good scrubbing to get all the loose chalk off.

After a few more attempts where I actually started to get up and get a heel into the arête Ceri pointed out that my heel was popping off whenever I attempt to move my hands and suggested I move it again.  I was a bit confused.  Why move it when I’d only just put it on?  But thought I’d give it a try.

Left hand on the big dip on the arête, right hand about it on the thinner section I could pinch a bit and pull, pushing right toe painfully into the face.  Bum off the ground throw the left heel up and onto a bump… then.. move it again sliding it upwards to meet my left hand on the dip, then move the right hand to the obvious looking hold.  Hang on, I’m still on the rock!  PING!  OOMPH! Bum on the mat.

Well, that actually worked!  Good Beta Ceri!    I spend about 30 minutes then, pulling on and working out the move to make it stick, until stuff seems to start to work.   Suddenly I made the next move and the problem opened up.  I was able to grab the top holds, swing my legs over and push over onto the top with a rather ungraceful grunt.   Yay!   A new 6a!   I hung around on the top long enough for Sheila to grab a shot of me triumphant and watched the rest of the group working on a blue traverse which seemed fun.

A nice bit of success to end the day!   I was supposed to be heading out for a run tonight, but it was almost 7pm when we headed back so instead we gorged ourselves on Satay stirfry.