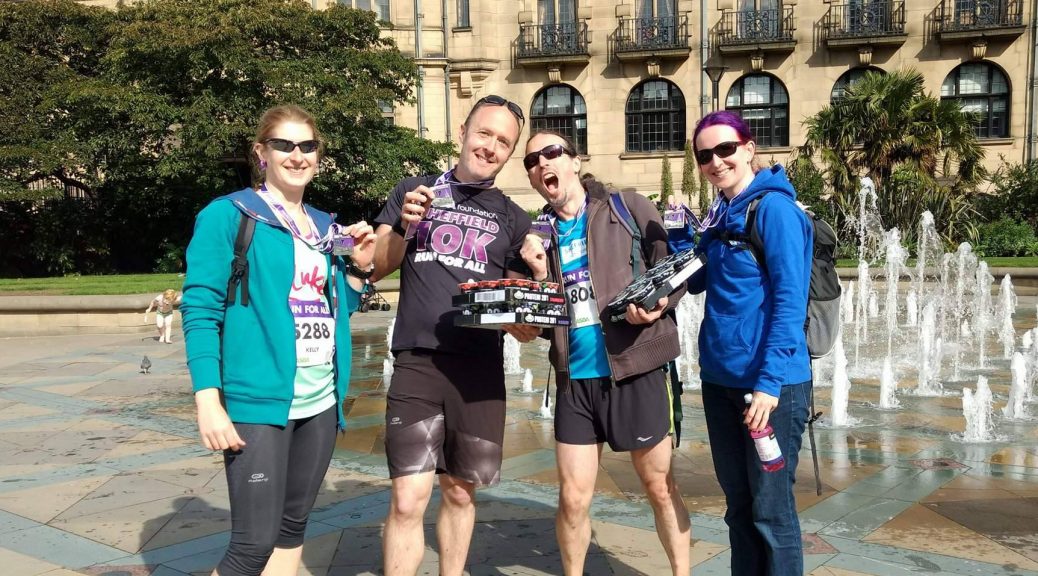 I honestly cant believe this time. You know how when people seem to play down how well they are expecting to run? “I’m tired, it wont be as fast as I want”, “I pulled something the other day” or “My training has been really poor”? This definitely WASN’T one of those times! I was telling people pretty much all weekend that being as this run was right at the end of my marathon training that I didn’t expect to get close to my PB last year. I’d almost talked myself out entirely of even trying hard, instead just going to treat it as a faster run. I felt tired. My knees hurt from a very long and hilly run home from Edale on the Wednesday. I was expecting to fade…

Anyway, roll it back a little. I was in London on Thursday/Friday/Saturday, seeing a band on the Thursday night, then drinking vodka till early hours on the Friday night. On the Friday I realised just how stiff I was feeling and managed to book in a last minute sports massage with Ultraactive Sports Massage for the Saturday evening. She spent an hour working on my lower back, thighs and calves which did help a lot and I went to bed on Saturday feeling a little more optimistic.

Sunday rolled around and we set out early to get there. Even though I’d bought my own entry, later on I realised that I could join a Corporate Team through work. This meant I needed a new number and there wasn’t time for me to have it posted. It didn’t take too long to get that sorted, and meant we had a bit of milling around time before the start of the race. Being on the corporate team meant we had our own room, baggage store and toilets too which was nice, so they were taken advantage off. Liz and the others running had to make do with the portaloos!

After a bit of wandering around, we eventually made our way to the starting areas. I went into the sub-40mins pen and ducked under the tape to get into the spacious sub 45min pen and found Richard, the guy I’m often chasing at the Hillsborough Parkrun. We had a bit of a chat and it turned out that last year he ran just over 41mins which got me thinking. Right now I was running a bit faster than him, so I just decided my plan was to stick with him and see what happens. Brave! (Or stupid, screw the marathon right?)

After a bit of a lacklustre attempt at the warm up, we were off and I initially tried to keep with him, but my thighs felt so so so tired. I think it was about halfway up Eccesall Road before I relaxed into it. At this point I’d decided that a really fast one wasn’t in me, so just tried to keep the pace up. I could see Richard ahead of me in the distance, and the 40min pacer every so gradually creeping away.

At some point, perhaps by Hunters Bar, I checked my pace and realised that by this point last year I was really starting to suffer a bit, both in the head and legs, but with a slower pace than what I was actually doing. Hang on, are we actually feeling strong? At this point, I steeled myself a little and tried to push the pace a bit. Just as we started looping around the park and into the bigger hill of the run I caught Richard up and ran next to him for a bit. I could sense that he was feeling like I was last year, and hung back a bit, part of me wanting to lend a bit of support, but also because part of me couldn’t really believe that I felt strong enough to push a bit harder.

After a bit, I pulled away and started pushing up the hill, my heart rate peaking and it started to feel hard just as I hit the top meaning I could coast down the hill (at quite a pace mind you!) It was odd to feel like I could push at this pace, but feel like I was getting my heart back under control. I resisted the urge to push hard here, knowing that there was another hill coming and I could push it on the downhill on Brocco bank afterwards.

Soon enough that hill came and relaxed a bit on it, letting some of the people I’d overtaken on the downhill overtake me back comfortable that I’d regain the time on Eccesall road. By this point was fairly sure that as long as I didn’t explode, I was in for a good chance of matching/beating my previous PB. Soon Brocco bank was here and after a few metres of getting my breath back before I started pushing hard and onto Eccelsall Rd.

The return was hard, and fast. It was easy to push my speed up, but keeping it there was a constant challenge. I could feel my heart rate creeping up and up and my body every now and then just slowed and needed me to push it again to get it back up to the pace I wanted. There was a woman running about 20 metres ahead of me along most of Eccesall road and I’d fixed on her as my target, trying to slowly reel her in.

I don’t really remember much of the last hill climb back to the finish, beyond starting to really feel it, and overtaking the woman from Eccesall road in the last 1k. There was also a point when I started to wonder just how far under my previous time was this? Could I be closer to 40 mins than I’ve ever thought possible? Oh yes, and just on the last little downhill before the final climb to the finish line there was a “Bloody Hell! Go Kelly! shouted at me by one of Liz’s friends Helen. She sounded surprised.

The last straight! As you come around the last corner you’ve about 50-100 metres of slightly downhill PUSH to meet the finish line. I had enough in me to push into an almost sprint, but I could tell I was tired as my posture went weird, almost leaning backward! I think I overtook 2 people in the last meter on the line as they’ll pulled up to finish.

I stopped and was gasping. Not bloody tasting gasps like at the end of the Grenochase (which I guess highlights just how hard that race was) but pretty close! Once I’d got the breathing under control, I went and got my medal engraved and waiting for friends to finish.

All of my friends running got PBs. I’m really impressed with them all, especially Liz getting a sub hour race despite IT band problems and not being able to train properly for the last month or so.

I still really can’t quite believe that time though. Endomondo has the last 5k down as 18:58. This means I ran the first half in 21:35, which is a half decent 5k time for me, with most of it on a slight hill. To then go on and do a sub 19min 5k time (which I’ve never done before) just seems crazy. I guess the pressure is on for the next parkrun!

Oh, the yoghurt? Arla were at the race giving away posts of yogurt and still have LOADS left that end. They were handing out TRAYS! We filled out bags up. Lots of protein for us!