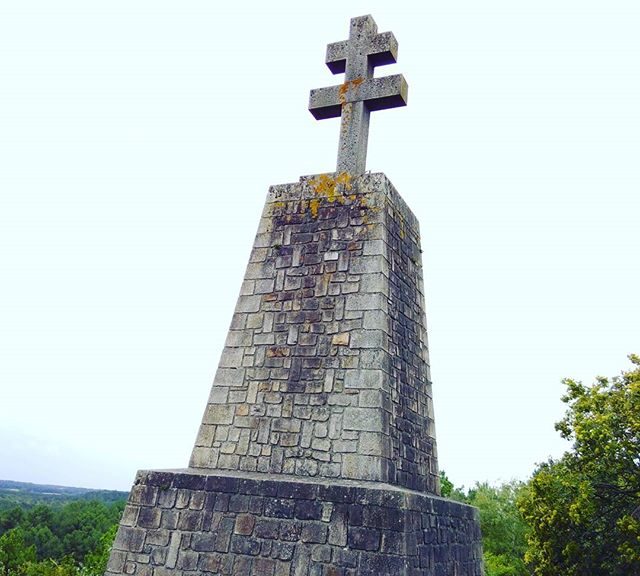 I needed to do a 32k long run while out on holiday in France. We’re right next to a lovely wood, but also not far away from the Trois Pignon where loads of awesome climbing areas are. While pondering what route to plot out, Andy suggested I run the “Circuit des 25 Bosses”. Checking it out, it appears to be a circuit around 25 “mounds” in the Trois Pignon, taking in a lot of the climbing areas. What a great idea!

Fixing the flawed design of my #saloman running jacket with climbing tape. Those lapels are a literal pain in the neck. #running #runningclothes

Finding a GPX for it, I imported it into Garmin Connect, and saw it was about 15k. Looking at how it had plotted against the maps on Garmin, I corrected it to follow the paths on the map and then added a run to the start and back through the woods behind our gite. That rather nicely brought it to just over 32k. Perfect!

The night before I restrained from too much beer and wine, went to bed early and got up feeling reasonably refreshed. The weather had looked to be really poor, but overnight it had developed to give me a window till about 1:30 before the rain properly started. I got ready reasonably quickly, all kitted up and ready to go, but not after using climbing tape to pin down the lapels on my Saloman running jacket. Bloody thing. I set up pretty much to plan at 10. I told the group I’ve be 3:30 – 4 hours, knowing that I was tired and it would be trail so would be slower than the 2hr 42mins Endomondo was expecting. Thinking ahead, I set up Strava Beacon to tell people where I was as I was running too, just in case I needed rescuing, and set off.

Monument in the middle of Trois Pignon

I was a bit achy and sore as we started off, but as I finally dropped of the roads and disappeared into the woods of the Trois Pignon things got easier. The bread crumbs on the Garmin worked well for the first section getting me to the start of the Circuit des 25 Bosses, marked out with red markers on rocks and trees. Turning onto a bit of a mean rocky climb which slowed me right down, I soon started to realise that “fixing” the GPX was a bad idea. The path I’d followed didn’t match the path I appeared to be on. After a little bit of starting to try to keep to it which lead me down dead ends, I eventually found a red marker and decided that I needed to just follow them. Now the fun began! As I reached the top of the first of the “Bosses” and had to scramble over a load of sandstone boulders, I also started to realise that I might have bitten off a bit more than I could chew! The second or third bosse had a big cross monument on it, and later on I passed a cave with a huge amazing looking overhang over it, with “DANGER” painted in red paint on it. Cool!

I started to get into the flow of it now, scampering over boulders, squeezing through tight twists and chimneying down drops. This was GREAT! but slow. A lot slower than planned. Also, some of the points the red markers were brilliant, just appearing with shapes showing you the direction to head next right when you needed them, but other times just not quite enough leading me to back track a little to the last marker and trying to interpret where it wanted me to head to spot the next marker.

Suddenly I realised there were two people running behind me, so I threw them a cheery “Bonjour!”. They overtook me and I start to follow them as they clearly new the route so could speed up somewhat. When I asked if they were ok with me following them, the lead guy laughed and replied “Sure! 5 euros!”. Thinking it was a joke I laughed two, then the second guy chipped in that he was his paid guide! Oops! I also realised there was a third runner with them a few meters behind. Now I had a dilemma! I was running a bit faster than them, but I was being slowed down by not knowing the route, meaning I was getting in the way of their progress. It made me feel a bit like a hindrance and a leech at the same time! After a bit of leapfrogging with them as I ran ahead, then they caught me up as I got lost, I eventually let them pass and joined at the back of them with the 3rd guy. Also, the heavens had completely opened by this point turning the paths into full on streams. The rain was also beautifully warm as we sped down a pine needle covered hill and it was really nice when we plunged through ankle deep puddles. Normally I’d have tried to avoid them due to not being able to see if there was anything dangerous in them, but it was just nice to cool the hot feet off.

After making great time with them, they eventually split off as they’d started the route at different point, leading me to find my own route. This last little bit slowed me to pretty much a walk as my thighs were killing me and it had turned from a walk into a full on scramble. The rock was also running with water, and climbing over marbled sandstone in trail shoes wasn’t the safest thing in the world! There was one point where I had to mantle over a shoulder high sopping wet boulder onto a sloping edge, on the edge of a cliff. That was seriously scary, but thankfully was the only point where my fear levels were at “I could die!” rather than “I could break something here!”.

After a slow last section I was finally at the finish and tried to take shelter under a big overhanging boulder to message the group. It was really late at this point and I needed to let them know I wasn’t dying in a ditch somewhere. Getting my phone out I had some messages suggesting that a: Beacon had completely failed to work at all meaning people had no idea where I was and b: that Liz was starting to worry a bit about me because I was way later than my estimate. I attempted to type a reply, but I was on 7% battery at this point and the rain was dripping off my hat onto my screen making typing hard! I managed to get the messages done, but they wouldn’t send… no signal and then the phone died. Bugger!

Right, well, about 10km left, and I really didn’t want to do it; my feet and thighs were aching, but at least it should be fairly easy forest trails from here. No scrambling! The run from here wasn’t too hard, mostly dirt and sandy trails which included an interesting bit under the motorway and a LOT of very deep puddles, but I was soon in the forest behind the gite and winding my way home.

The windiness of the path over the incorrect route I plotted meant that the run was longer than expected, being more like 35k than the 32k I’d expected, so I was really starting to hurt by the last 20mins of running or so, but after a short walking section up a rather mean little hill before dropping on to Chemin du Cornebiche (which means Deer Horn, not corned beef!) and I was nearly home. A last push got my pace up a bit as I really wanted to be back before search parties were send out and I was home!

Liz met me at the door and supplied lots of hot coffee and Martin supplied buttered Bara Brith which is probably the perfect post run food. I eventually stumbled into the shower and stood in it spaced out, somewhere half between crying and laughing on the come down.

I suspect my feet and legs might not be able to climb tomorrow, but I don’t care because that was bloody brilliant. It might have fucked my training up a little though! Estimated time: 2hrs 42 mins. Expected time: 3:30 – 4hrs. Actual time: 5:14:40. Oops!