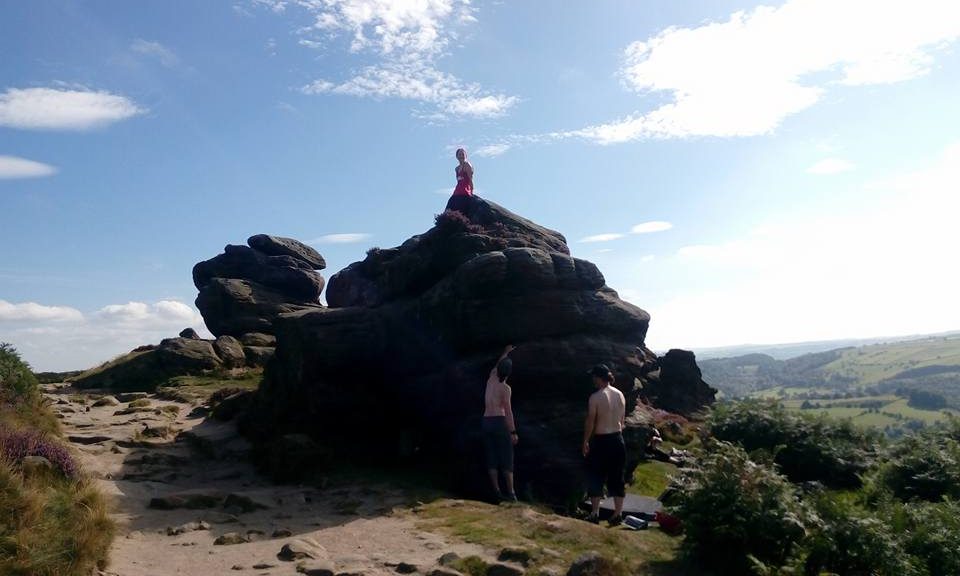 Liz and I were having a coffee and a croissant the next morning in Costa when Martin texted us about going out again.  I had loads to be getting on with, but we’ve been unlucky in August for decent weekends so it would have been a shame to miss out!

This time we went to the Pinnacle Boulders on Froggatt Edge but with Andy and Ceri as well.   We all piled into Andy’s car and made the short hop over, parking up at the top of Froggatt, which meant a longer walk into the Pinnacle boulders, but meant we didn’t have to slog up the steep slope which would have been bad for Liz’s sore knee.  This did mean we were right next to Hairpin Boulder which is almost on the road, so decided to warm up on there.

Tourist Path was a simple walk up but good for getting the brain in gear when using it as a descent, then I needed a little more brain power for Flake Problem and then had some real climbing with Hairpin Arête which went once I’d worked out how to hang off the arete at the top to get over.   Next to it was Hairpin Scoop which was definitely a bit trickier, just because it had an awkward start and then a mantle.


Finished on the easy stuff, I moved around the side of the boulder and started to check Crash Test out.  This looked a little more serious than the other problems with a sit start on a slightly overhanging arete and a whole load of options for getting to the top.   I sat down, pulled on and started moving, only for my right foot to betray me, pinging out and slinging my chest into the rock.  Oh dear!  Time for more spray skin, this time on my right elbow and left shin, and a couple of grazes on my chest.  Walking it off a bit, I went to find someone to spot a bit before having a few more goes.   It didn’t take too long to work out the sequence (There are some good holds on the right!) until eventually on my fourth or fifth attempt it went.  Yay!  It’s a great problem and deserved of it’s two stars on UKC.

We were all done on Hairpin boulder so headed over to the Pinnacle boulders.  It was about a 20 minute walk of roughly 1.5k to the boulders, but it wasn’t too warm and there was a good breeze so it was actually quite pleasant even loaded down with climbing kit.    The boulders were great.  Lots of easy things to work on and then smattering of harder, yet possible stuff to feel like you stand a chance.   Areet (Left) and The Northerner were the first to cause some issues.   None of us could work out how the sit start of Areet worked as your knees were trapped so far beneath the rock you couldn’t pull up to grab anything!


The Northerner was a great problem but I just could not finish it.  Andy, Martin and I had quite a few attempts and by the end of I was pretty reliably getting to the sloping top but I could not work out how to use it to get up at all.  This might be a good little project for me to get my head around.  (Although a bit disappointing for a F5+ to be a project….)

Over on the next boulder, Air Bear did it’s damnedest to shred more skin of my chest, but what an awesome little grind that was?  Even better next to it was Flatulence which I thought was brilliant.  One of those climbs with “yes, they are crap but just bloody use them” holds on.

Naughty and Rib Tickler took a couple of goes but went eventually, but you could tell we were getting tired by this point.   There were quite a few other problems I want to have a go on, but didn’t really have the beans!

Packing up, we had a nice stroll back to the car before rolling down the hill to The Chequers Inn for a swift couple of halves before heading back home.

Once home, I rediscovered all my grazes in the shower.  Bloody ow!

Soon we’ll be in Fontainebleau again and I’m hopeful that good few outdoor trips will have helped prep us! Cross fingers!