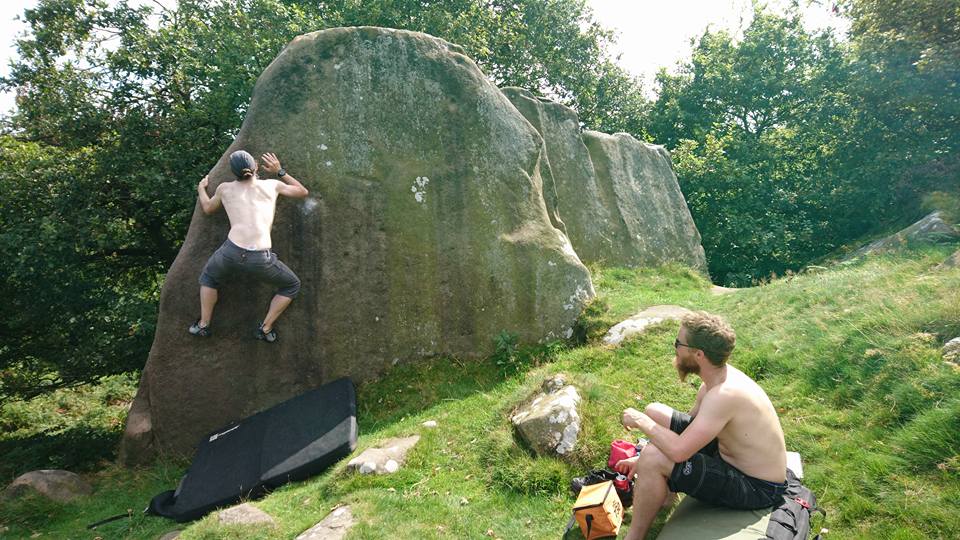 The last bank holiday of the warm seasons was upon us, and after checking out the forecast, I tentatively suggested we look to go for a boulder on the Sunday.  Originally Liz and I started planning for going somewhere reasonably close (as we don’t have transport) but Martin turned out to be free and willing, so we went a bit further afield.

Andy had mentioned Robin Hood’s Stride a couple of times as a good place with a good mix of problems, so after checking it out in the book we headed out there, leaving at about 10:30ish.   It was about an hours drive through a surprisingly quiet Peak District (even Bakewell was fairly queue-less!) till we got to the lay-by for parking up and made our way up to the hill.

Robin Hood’s Stride is an interesting looking pile of rocks on top of a small hill alongside the Limestone Way.  We quickly found The Green Boulder, and then dropped down to the first set of problems on the Lower Boulders.  The Joy of Ledge and The Joy of Noledge were a little bit of a rude awakening to the day.  Not terribly hard, but you did have to remember how to use your feet and trust the grit under your hands!

There were two more problems on the end of this boulder, Flake Slab and Flake Slab Arête.   I pulled on to Flake Slab, tried to put my left foot on, weighted it and then fell as my smear disappeared beneath me, stripped a good chunk of skin from my right elbow and shin. Ow. Time for more spray skin. Double and Triple ow! I decided against trying these any further!

Next boulder: The Arch was definitely a little tougher than it’s f2+ grade suggested. T-Slab and T-Slab Arête were great and definitely worth a * or two.

We’d got a bit hungry now, so we moved on to The Green Boulder and had a bite to eat. There wasn’t really anything I was expecting to get up on this one, but after munching on some mini cheddars I stepped up to Short Arête, at a tasty looking f6B.

Feeling around on the arête I found a spot with a dimple which would help for pulling on, and scoped out a left foot lump to pull onto, and then a small hole to aim for with the right foot and had a go. I managed to get up on my feet on the first attempt, but came off quickly throwing wildly with my right hand to the arête. Martin came over and joined in, and after some copious brushing we started to make a bit of progress. The trick was to get stable on those feet so you lift the left foot to another chalky looking lump.
Eventually I managed to get my left foot in place and then you just had to keep going! It felt great to top out on a 6B, which is probably the hardest I’ve climbed in the UK for ages.

After the Green Block was The Dorsal Fin, from one side looking just like its name suggests. The appropriately named Vandals was ok up the huge chips once I’d found my balance. Potty Time was a waste of time, just one horrible mantle into a dirty scoop, leaving just the great looking Flipper Arête. And great it was, but far too scary for me! I made it 3/4 of the way up, but the overhang over the big block behind and the large move to the good holds on top was just too scary for me today. I reckon I’ll get this one one day though, but might need another mat to throw over the boulder behind to provide extra balls.

Finished with The Dorsal Fin, we headed up to the main wall of Robin Hood’s Stride and got on Muscle Slab. This was a fun, if slippery problem which I onsighted. It’s one of those issues were you get 80% of the way up and then your spotters stop paying attention because they think you’ve finished and you’ve actually got 1 or 2 nervy moves left! It’s not like leading where you call down “safe!” or “off rope!”. The rest of the stuff on the main wall looked a bit hairy for my levels of bravery right now, although I might have been capable of Nobody Knows, a rather fruity looking F6b on the right. The top holds looked great, but it was a bit overhangy!

Last set of blocks of the day: Shadow Slab (with no hands) and the easy problems of Scoop Slab and Angle Arête Right. The traverse across the front of Scoop Slab Traverse evaded me though.

Final tick of the day was Angle Arête on the left side of the block. Not anywhere near as satisfying as The Short Arête, but require a couple of goes.

Now, it was time to home and get ready for a bank holiday BBQ!