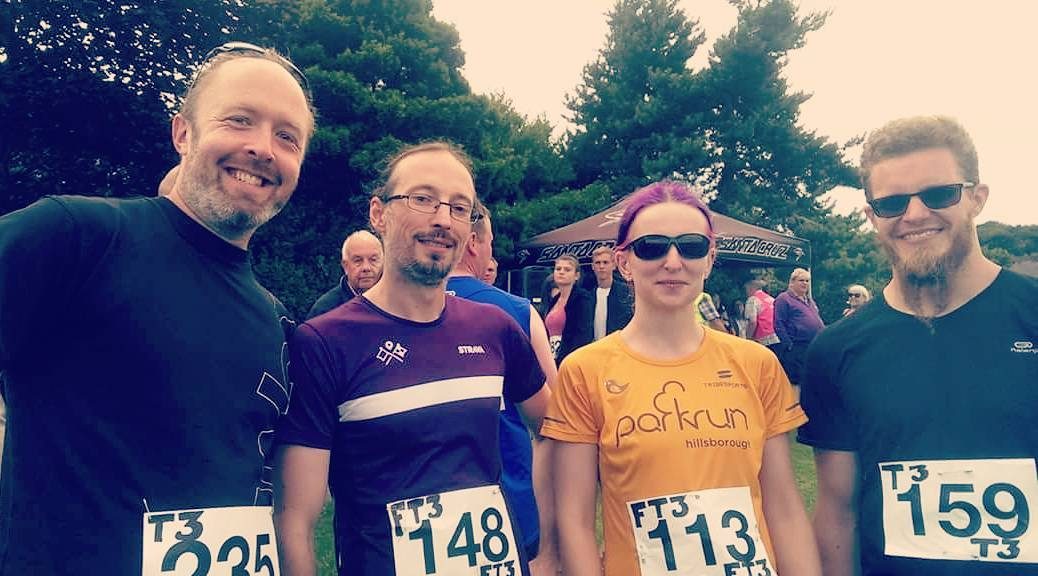 The Grenochase is sort of the local run for Andy, being just up the hill from his. Usually it clashes with the Tramlines festival, so it gets ignored but this year there was no clash, so he signed up. And then Martin followed, and then under some pressure Liz and I joined up.

Friday soon rolled around, and we all found ourselves scrabbling to leave work early to get to Andy’s so we could get changed and begin the walk up the hill. Eventually we got our stuff sorted and began the short walk up the hill from Fox Hill to Grenoside.

I was a bit nervous. I’ve been supposed to be clearing a 20 minute 5k at some point in my plan, which I haven’t managed yet and my training cycles always seem to swap from speed to distance just as I’m getting close. Back in February, I’d managed a new PB of 20:29 which really showed I was getting close, but hadn’t really had the chance to run a fast short distance race since. The Grenochase is a 3mile race, so not quite 5k and looking at the previous results showed that it was bloody fast! The pressure was on and I was starting to feel it. Walking up the hill I started to develop a stitch, and then a my right foot started complaining… Anyone ever noticed how your body starts piling up the excuses before a race?

Eventually we got to the start and registered. The start was a big field behind Main Street and was starting to fill up with people. Registration was in a little marquee with a small queue and it didn’t take long to pick up our numbers, but there was a problem! Yet again, someone had decided that I was unable to fill out a registration form and decided that I was female! As the gender markings were drawn on the numbers, mine needed to be scribbled off once it had been pointed out….

We milled about a bit waiting for the start call and took a group selfie. Although we had a team of 4, apparently you needed 5 people, so I don’t think we qualified for the team results. Still, it was a nice photo!

Finally we were called to the start line. I sort of pushed towards the front, but it got very crowded so just got comfy where i’d ended up. The announcers was chit chattering away over the tannoy cracking jokes that I suspect the majority of the very local field appreciated a bit more than me, but it was entertaining non-the-less.

A few minutes later and the race started and BOY did it start. The whole front of the pack surged forward along the grass towards the curve right to the main road. I weaved around some of the slower runners ahead of me, trying to catch up with the faster pack near the front to join them. As we turned onto main street I caught the tail of it hitting the road and checking my watch saw that we were at sub-4mins per K. That isn’t going to last for long I thought to my self as we approached the corner into the first hill. The local spectators had really come out, lining the road and cheering us on really quite noisely. Well, I say us, but they appeared to know quite a few of the runners as loads of first names were being used! Still, it was great to see people out and cheering us.

Ahead of me I could see two familiar shapes. One of them was someone from work who also ran the Sheffield Half Marathon earlier in the year. He had a familiar looking purple Sheffield half teeshirt on which made him stick out. Ahead of him was a guy I recognise quite well. He often runs the Hillsborough Park run and beats me every time, including one time when he sailed past me on the finishing straight. Spotting him, I realised I had a plan I could work with: Keep close to him! He’ll drag me around in a good time!

Now, the hills. Main street was a slight climb of around 3%, but this hill was double that. It wasn’t steep enough to properly stop you in your tracks, but it definitely made you feel it. Trying to push up the hill, rather than pull with my toes, I just focused on pushing hard from my thighs and trying to keep my breathing under control. Purple shirt and Park run guy kept up the pace ahead of me and we ate away the hill gradually, overtaking a bunch of people who had started off probably a bit too quickly. A curve to the right and it got a little steeper before finally levelling out a bit to give us a breather, before swinging left and starting the downhill.

And boy was a glorious downhill! I’d let Parkrun guy and purple shirt get ahead of me by a bit, but I just leaned into the hill and let it take me as fast as I dared. At it’s steepest of about -8%, I hit 3min/s and boomed past a group of about 6 little kids all with their hands out for high fives. I got them all! The 2nd half of the road after a little flat bit was steeper than the 1st and at this point I realised I was about to overtake Parkrun guy. I had a momentarily worry that this was only the first lap and I he always caught me up, but thought screw it and pushed on.

Hitting the bottom of the hill and turning onto the bottom of main street we started climbing again. With parkrun guy behind me, I focused now on catching up purple teeshirt guy! He wasn’t too far ahead, but the hill meant I only just caught up him 3/4 along this section. I dropped in to run with him, muttering something about how tough the hills were and we just focused on keeping the pace up.

I was pretty surprised how I was feeling to be honest, I knew I still had that first hill again, but once that was done it was the big downhill and half of this street again. The hill was the test though and that was next.

Together we turned left and started the hill. We initially approached it side by side but I gradually started to fall behind. Not too far, never enough to be out of contention though. Thinking back, I think that I just decided to bid my time a bit. It didn’t feel like I needed to keep with him, or try and over take, that it was enough just to keep hanging on to him and have him drag me up the hill. It seemed to work though as right at the dying gasp of the hill he started to falter and I overtook him just as we levelled out.

I was gasping a bit, but managed to keep the pace increasing as the flat section started to turn into the downhill and again I leaned forward and let the hill take me. It took a while to get my legs moving quick enough again, but by the time I hit the steep bit in the 2nd half, I’d recovered enough to really push it again. Ahead was a small group of 3-4 people including one woman (who I think turned out to be the first finishing woman!) which I barrelled past at a pace that surprised me (sub-3mins/k) and I managed to overtake another person on the corner at the bottom of the hill.

Now, it was the last bit, the gentle climb up Main street (which felt anything but gentle) and the final stretch to the finish. I overtook a large group of runners with collection buckets almost immediately (almost finishing on their first lap I think). Almost to the right hand turn I could hear the footsteps of someone starting to catch me up. This gave me a spurt of energy from, well I’ve no idea! Until that moment I felt toasted, but somehow, just being so close to the finish without having been overtaken meant I just grabbed a hold of it and pushed really hard.

Hitting the grass for the final stretch I think I hit the fastest part of the race entirely but this time on the flat trying to keep whoever was coming up behind me away. I’ve actually no idea if they were still there, but there was no way anyone was going to overtake me now.

I staggered over the line gasping and checked my watch. This was the first sub 20 minute race I’d run since I was 16 and running in 100m and 200m races. My Garmin showed me 18:37 which I think is projecting a time over just over 20 mins for a 5k. Considering the hill, I was pretty pleased with that! I could taste blood from the breathing exertion and it took quite a while for my breathing to settle down afterwards. I’d not felt like that since the school races either!

I’ve not seen the official results yet, but I’m keeping an eye out on the website for them to appear soon.

There has been a problem with your Instagram Feed.
Error: No posts found.