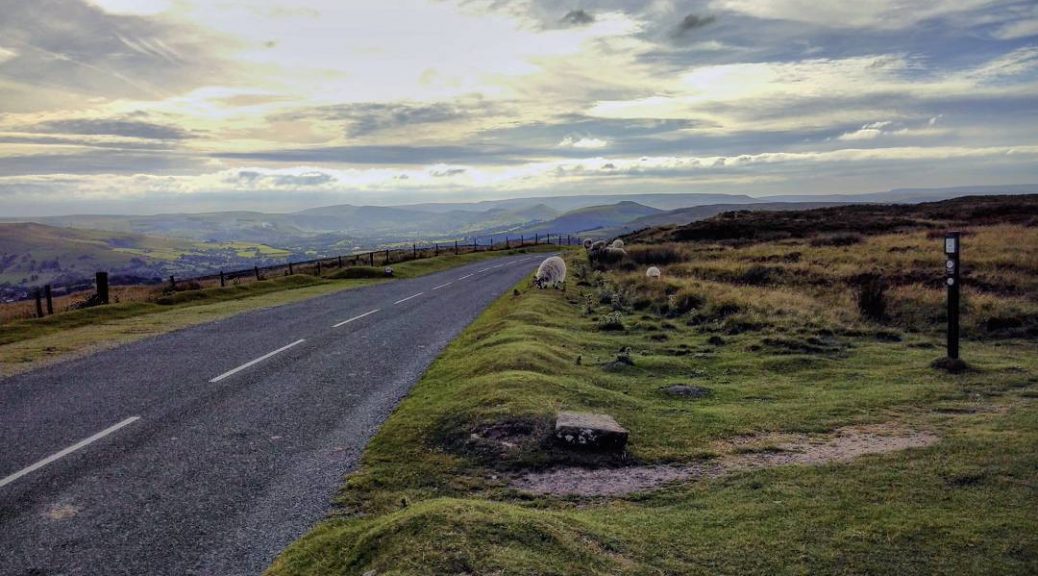 The weather turned nice again after a couple of wet days, so we had the chance to conserve some of the momentum on the outdoor climbing. Martin and Liz chose Stanage Far Right which suited me fine as I’ve never been there before and I knew that the exposure around there would keep the midges off. I think it was likely that we’d have been eaten alive if we’d planned on Plantation or Burbage.

We left the centre of Sheffield at about 5:45 and after getting through the peak hour traffic along Eccesall road, arrived by about 6:20. Really not a bad trip time for getting out for a climb from the city centre!

Although the weather looked it was going to be a nice, I was a little dubious, so had decided to wear my climbing jeans, rather than shorts which had been my first impulse. That was definitely the right call, as opening the van revealed that it really was quite windy up here! Even with my hoodie on it was chilly, so I threw my windproof running jacket over the top which really helped. I’m really glad I got that!

After waiting for Ed to turn up for a few minutes, and taking some photos of the great view from the road, we set off along the footpath up to the edge. We’d chosen to start climbing at The Henge section, rather than at some of the areas closer to the car as they looked a little bit high for our first climbs, despite being green ‘easy’ climbing.

Finding a spot to set up, I quickly changed my shoes and immediately jumped on Tweedle Dee without setting a mat up. I’m really trying to train myself to get used to climbing confidently on easy things and I’m doing that by often trying to climb things first out of the group so I’m acting without any beta and just my own assessment of the climb, and without a mat so I’m forcing myself to think about the moves and quality of the holds under my hands. I suspect sometimes it’s a little unnerving for the rest in the group as they end up shuffling mats underneath me just in case, but I feel like if I’m forever protecting the route, I’ll never get 100% confident in my ability. Obviously if the landing is very poor, or it is a more difficult climb I’ll get a mat down, but 3’s and 4’s I really shouldn’t need them. Problems like this get recorded as solo’s rather than bouldering, just because I see the bouldering mat as the differentiation between the two styles.

Tweedle Dee was pretty easy, but next was Steps which although started easy stopped me in my tracks for a bit. I couldn’t go the top out for no good reason beyond bravery. The top of Tweedle Dee had better hand holds than this one, so I was really uncomfortable getting a foot high into the holes and manteling the finish. I escaped left on to the easier finish on Tweedle Dee instead. I intended to come back to it once my brain had warmed up a bit, but never did.

#Bouldering out on #stanageedge far right. A good evening!

After talking Liz up Tweedle Dee, I finished up the last easy problem on this piece of rock (Tweedle Dum) and joined Ed and Kelly climbing on. Hook, Line and Sinker I found more difficult than Ed and Kelly, simply because of hip flexibility. Both of them leg pressed from their right leg at the break with an ok right hand side pull, but I couldn’t get a flat foot down on the break to put any pressure through it. After a chunk of faffing I managed it via a different move and finished it easily, but it’s another example of my hip flexibility getting in the way of what should be easy climbing.

Next we did Right Hook, Slotted Arete and Slotted Wall. Although Slotted Arete was graded as a 4a it did seem to be the easiest climb of all of the climbs on this section. The tougher Slotted Wall was interesting; a sloper break proved tough for me to do a pull up on so I could throw a hand for the top. Ed seemed to be able to reach the top with a move much easier than me. I repeated it just to see if I was doing something stupid, but ended up finishing it the same way.

Next we moved along to Quick Wall which was a red route at F6a+. I was a bit confused about it in the book as the route mark ended at the wide break, rather than finishing up the top. Pulling on without the mat, I pretty easily got to to the break and had a look around, trying to work out if it could get up to the large left hand crack in the next section of rock so I could pull onto the top, but it was too far away and the hands got poor if I pulled up. Still, the route in the book didn’t include this section but it seemed too easy for a 6a+ without it. Ed, Kelly and I had a go on Quick Wall Traverse along the low break and finishing up over the top of the higher section, but we all struggled to make the moves along. It definitely seemed to be one of those problems that rewards practice though as I just couldn’t engage my feet on it properly. Some decent repeats and I suspect they’d start being useful meaning it wasn’t just a lot of tough finger hangs!

Just around the corner Liz and Martin had been playing on Front Flake and Staircase Flake. I did the sit start for Staircase Flake, although possibly with using some rocks at the bottom that might not be included, then moved onto the sit start for Front Flake. Although I could do the sit section, I was completely messing up the next few moves. After bitching and moaning a bit, Ed watched me and pointed out my stupidity (I needing to move my right hand, not my left.) and it went pretty easily. Duh.

Next was The Hinge, a wall problem on top of a sloping piece of rock. There wasn’t much to it really, starting with low hands, right hand to a half decent crimp, get the left foot high and push for the top of the wall and it was done. However, both Martin and I failed to really get anywhere past the first move. I had a few more goes and then Ed came over and flashed it. Seeing him doing it meant I was able to do it after another 2 goes. I just wasn’t committing to use the crimp properly. I considered the problem next to it, but the fall was pretty horrible, so avoided it.

Trying to find some inner peace after the fluttery climb up the highball 'The Henge'. Really not very hard, but high! Stolen from @mgleadow #stanageedge #stanageedgefarright #bouldering #peakdistrict

Next to these two was a tall problem, The Henge. Described as highball and with a series of increasingly helpful breaks, I watched Ed start it then back off the start as it started being exposed and decided that I was going to give it a try. This problem was easily within my grade ability and I needed to sort my head out, so went to give it a ago.

Just like described the breaks got better and better the higher you went. As the anxiety climbed from the exposure, the hands got better meaning it was easy to control. Pulling over onto the top, I sat down for a breather to get it all back under control and got Martin to snap a fun picture. There was still a little easy bit of climbing to finish before topping out, made only nervy due to the height and not being able to see what the top of the rock looked like due to it sloping away. Once on the top I pratted about a little looking around before Liz called up telling me to get a move on because they were being eaten alive.

It turned out that at some point earlier the wind had died down and we hadn’t noticed. Then the midges had come out! It wasn’t too warm so we were all mostly covered in clothes (apart from Kelly in shorts!) but that just meant they were buzzing around peoples faces. As I descended down to the bottom of the edge I got my face full of them. Ed, Kelly and Martin then had a proper go on it and finished it easily. It’s not tough, just high so definitely recommended!

It was pretty much time to pack up, but I wandered around the side of the hinge to where Liz had been working on Sparky Slab. She’d been soloing it a bit to train her head a bit, but needed a spot and a mat to get further. After soloing up it, we grabbed a mat and talked her up. Nice job!

That was pretty much it for the evening. We packed up our stuff and made our way back along the path to the cars. Once away from the bottom fo the edge the wind had picked up a little, enough to get rid of the midges but not enough to be cold. We following the winding paths through the short ferms around us and spooked a couple of lambs and rabbits chewing away in the undergrowth.

All in all, quite a successful little bouldering trip. Good head training and helping to keep the muscle memory going for climbing outside. There is still plenty for us to work on at Stanage Far Right, so we might go again soon.