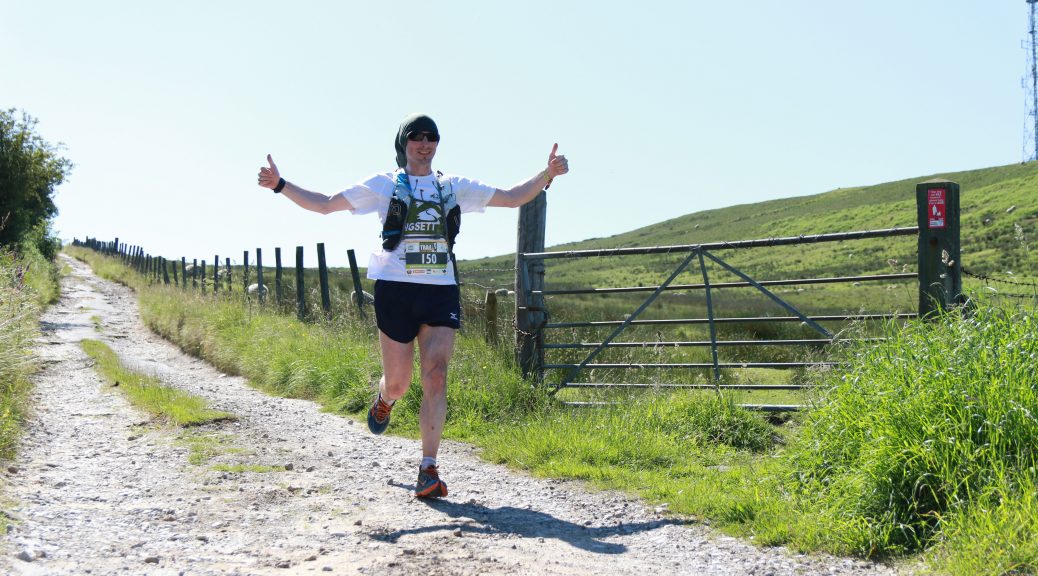 This week I was supposed to be tapering.

The training plan I’ve been following for most of this year was for the Round Sheffield Run; a staged 20k run over 24k on the 25th of June. It’s a great race, and I wanted to do well on it, so was trying to keep to a plan to help. This week was my taper week, but I couldn’t resist.

Martin of Run, Climb and More had been seriously bitten by the trail run bug earlier in the year and had signed up for the Dark Peak race around the same time as the White Peak race earlier in May. I’d looked at joininghiim on the shorter course but got all sensible until the week before.

Who wants to do boring taper runs on the same old roads when I can try and take it easy on a new bit of trail eh? 🙂

So, I signed up and then ended up with a rather hilly race in the hottest week of the year so far. Uh oh!

The weather had started building on the Friday, getting really warm for the afternoon of bouldering at Burbage I’d planned. I was started to get worried about water though. On the best of days I’m not great at getting liquid in me, but when it gets warm I get worse at it. I’ve discovered since that I’m better at drinking from a running soft flask so was carrying them around with me all day on the Saturday to try and stay hydrated, but I went to bed on the Saturday night really quite worried about the weather forecast. It looked like we were going to be doing this with temperatures in the high 20s! Eek,

The next morning I met Martin at 7:30 for the drive across to Hayfield. It was about an hour across the peaks, which was a lovely drive in his van. Dehydration-wise, I didn’t feel too bad, sipping at my flask every now and then. Once we got there, I smothered myself in some awesome factor 50 sun cream that I’d picked up when I was in Portugal last year before we headed our to register for the race.

Like the White Peak race, they’d lowered the kit requirements. Something would have really needed to go wrong for us to need the waterproof trousers, so I dumped them along with my jacket. My pack instead just carrier my water, a couple of gels, a protein snack bar and a foil blanket just in case! Clothes wise, it was shorts and my Langsett Trail 10k tee. I whacked a buff on as well, just to keep the sun off my head a bit. Probably a good idea in the end.

I’d decided that my best course of action was to stick with Martin on the run. His target pace for the run was around my standard easy pace run so should make good taper run territory. After hanging around watching the long route runners set off and taking some silly selfies, it was eventually our turn to set out. Like the White Peak, this route has a special dibber you had to pop into a machine at various spots along the course.

Dibbing in we set off in the middle of our pack, gradually picking up a bit of speed until the trail bottle-necked at a bridge and some stairs down. It was at this point (9:50ish?) that some runners came bombing past us back to the start. Hang on, this seemed a bit early as we were in the first wave for the short run… A little confused, I shrugged and then Martin and I hit the lovely shady run along the Sett Valley. Checking my watch I realised we were way over pace and let Martin know, but he shrugged and stick with it, deciding to just run with it. We both knew this bit was a gradual descent so it was going to be a little faster than normal. There was a point where I lead on an overtake and accidentally dragged us on a bit way over pace, but I realised and we dropped it back a touch.

The easy times couldn’t last forever though, and eventually we swung right onto the beginnings of a hill and then were spat out on to a larger road. Crossing over to start up the hill proper, almost failed to spot the marshals waving at us to dib in at a feed station. Obviously this was far to early for us to use, but was the halfway point for the longer route runners. Stopping to check in, we then started off on the climb properly, and it was some climb!

And what a climb it was! About 6k solid up hill, initially open road which although had trees on either wasn’t doing much to keep us shaded. I quickly reached the point where I felt I wouldn’t be able to do this, and then it all stabilised and I felt comfortable. I often wonder what’s this all about, it’s as if my body can’t be bothered to handle what I’m asking it to do and then it gives up and capitulates to the demands! The road keep on going getting gradually and gradually slimmer and less well maintained with numerous fake summits. I felt a bit sorry for Martin here as he was pushing pretty hard and it’s tough when you see what looks like the top and it turns out to be an illusion!

At about 3.5k (so after a 1 and a half of climbing) we had a little respite with a dip which was great for giving the legs a breather. Just before 4 the terrain changed into a stony track rather than a true road and added less sure footwork to the mix which made it a bit tougher. At 4.5, another little dip before a steep section and then the gradient eased a little for about a k and a half before swinging to the left onto a rough tractor trail with a gate. There was a water station around here, not on the original route but put on by the course because of the temperature. We passed it, drinking our own water instead, but quickly slowed to walk this section.

This bit of the trail was lovely, ascending along the side of the hill giving us some great views across and over Stockport and eventually to Manchester. I had the chance to look around a bit, running ahead to get the gates while Martin got his breath back. After 3 gates (and about 3/4 of a k) Martin found his pace again and we started up for the last 1 and a bit of the climb. There was even a handy summit marker for us!


From here it was all down hill, and it was great! It wasn’t the easiest trail, but I definitely could have got a serious pace up on it. I’m considering doing the run again next year so I can see how fast I came make it down. We has flat sections interspersed by torn up bits of ground, and eventually a gravel trail on the bottom half were we were both snapped by Chris Meads who was doing the event photography.

The descent was soon over and all we had left was the return along the shady Sett Valley, which was a blessed relief from the pounding the sun had been given us. As we came up to the steps and bridge again, I let Martin take the lead so he could pick up a good pace for the finish.

Once over the line we dibbed in for the final time and Martin found some shade and dumped his remaining water over his head. I felt ok to be honest; I think the buff helped keep the heat off and the odd sips of water as we went kept the dehydration down. I stretched out a bit and drunk more water and waited for Martin to recover before we headed in for getting our results.

Seeing the results was a bit of a surprise. I’d finished in 13th place and really did feel like I could knock at least 5-6 minutes of my time which would have put me quite near the top of the results. Martin was really happy with 14th, he’s pushed hard and had been rewarded coming in really high up the results.

We let the results sink in while eating the traditional Dark and White Peak events snacks of Sausage rolls, cake and crisps along with some orange cordial and a cup of tea. It wasn’t long then till the awards ceremony and then a drive back across the peak district for us to grab a late bacon and egg fry up, courtesy of Liz.

Although I felt pretty good at that point, I started to get a bit of a headache which grew and grew through the rest of the day. The heat taking its toll I guess!