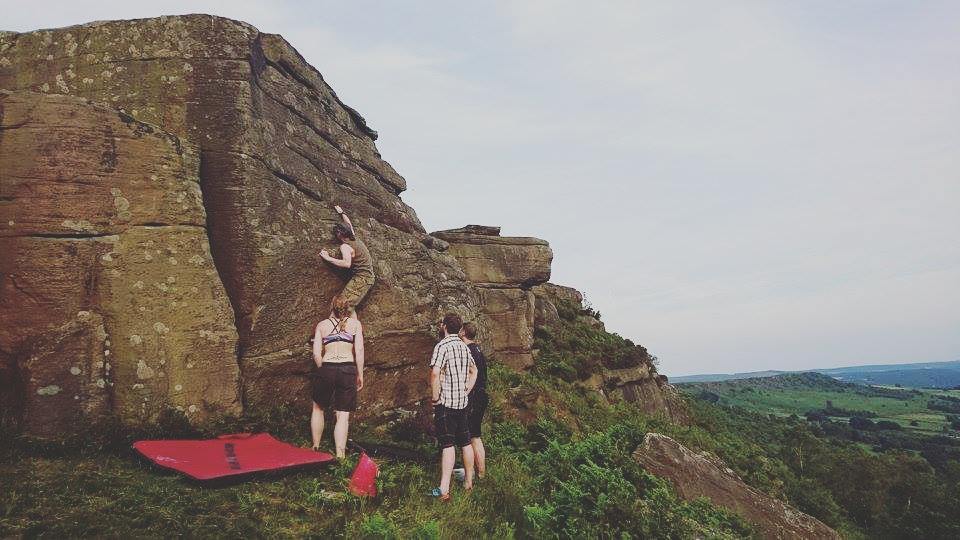 The nice weather from the weekend continued into Monday meaning that our usual trip to The Climbing Works would have been a rather hot and sweaty affair, so we decided that we should keep up the good work and go out again.

Liz and Martin had been plotting where to go and selected the “Cioch Top Boulders” at Curbar. Curbar isn’t too far from Sheffield, so we could get there in a reasonable time. I’m always a little nervous of this set of rock though, as I tended to find that the routes always seemed to be a bit harder than described for me. Or perhaps I’m just rubbish 🙂

We parked up and started our way up to the top of the edge to find our way along. It’s never really clear the right way to get up to the top and after some debate, we just headed out and eventually scrambled our way to the easy walking above. After 10 or so minutes of wandering along the top of the edge, we spotted Dog-Leg Crack (which is pretty distinctive) and therefore we know we were just in front of Moon Buttress and around the corner from our target boulders.

And then we got confused. Where were these damn boulders?!

Eventually I dropped down off the path and spotted them. The picture in the rock fax book was a little confusing because from the angle it was taken, the boulder in front of the rock with Crispy Roof and Left Arête on was merged in, making the rock look very different! Once we worked it out, our “warm up” climb, the Font 4 Left Arête looked quite a bit more than just a warm up! Still, I pulled my shoes on and went for it.

This boulder was a reasonably overhanging lumpy looking bit of rock. It also feels… delicate.. with some of the folds and edges on it feeling quite friable and hollow. The previously mentioned boulder in front of it is effectively under the overhang, meaning a fall from it would drop you straight on to it. It’s easy to protect with a mat, but when you haven’t quite got your head sorted yet, did made it feel a little intimidating! I fluffed my first attempt on it, instead of properly pulling on, going for a half arsed jump for a large edge on it. NO idea why I did that when I could just pull on. Climbing up it was pretty simple and it only really got properly nervous pulling over the top. Big exhale and relax. First climb out of the way.

Everyone else scampered up the climb apart from Liz (it was far too tall and exposed looking for a first climb for her!) so we started looking at Crispy Roof, pretty much the same route just in the middle of the rock without using the arête. Again I took first attempt, this time fluffing it because of my sore tips. They’ve broken through on my left hand while pulling on the Pock sit start on Saturday and weren’t quite healed yet. After everyone else finished it, I had a couple of more goes eventually working out a sequence that didn’t demand too much from the sore fingers and rocked over the top to finish it… messily, catching my shin on the edge of the top and scraped myself yet another scar :(. We had a look at Crispy Noodling and Crispy Rib but decided they were well out of our range at the minute so moved on.

While everyone else had a look at the Star Trek themed climbs on the next boulder I fished out my handy spray skin and covered up the bleeding mess on my leg. OUCH. Christ. How much does that stuff hurt? Still, it was better having all the flies and midges which had just started to arrive fish around in there. I took the opportunity to smother myself with some deet as well. Bloody horrible buggers!

Next we started on the Star Trek climbs. Chekov and Scotty were pretty simple, even with adding sit starts to them. I really enjoyed Bones, which was a little more interesting. I’m pretty sure I used the crack Rockfax suggested I avoided. It was still nice though! I managed to somehow get deet in my mouth though when going up Scotty. YUK! That was pretty distracting.

After these we took a look at Uhuru and Mister Spock. Spock looked a bit high and worrying to start with, so we thought we’d give Uhuru a try first before attempting it. It shut us ALL down. Perhaps it was just too warm (it was mid 20s and a bit humid), or perhaps we were all a bit below par but we couldn’t get past the 3rd move. I seemed to be able to get the furthest on it, pulling on with a high foot, swapping hands and moving my right hand twice upwards but there was nothing good for that right hand so you could get established on the ledge. The bulging shape of the lower part of the climb meant you needed a good hand hold and we couldn’t find anything apart from dirty slopers covered with a fine layer of loose sand. Perhaps they stick on a cooler day? We all tried a number of times before giving up.

Halfway through I had a try on Mister Spock, but couldn’t even make the first move. Perhaps I’m just bad at arêtes! By this point we were all feeling a little put upon and the midges were starting to get really annoying, so we moved on to Moon buttress to have a go here instead. I wasn’t optimistic, there wasn’t much that was easy here and stuff that should have been within our grades was shutting us down completely this evening.

Pottering around the edge, we started out looking at Dog-leg crack. Oh brilliant, some jamming :/. Ed had a first go, getting about 3/4 of the way up before backing off complaining of it being really greasy. I follow up and didn’t really get far at all before backing of. Despite my hand being squished into the crack it would just gradually slide out whenever I tried to weight it, taking skin with it. The rock beneath my foot was just as bad, the angle meaning I couldn’t quite keep straight onto it and instead would slip sideways. Ugh, horrible!

We swiftly retreated and went instead to The Trench.  Aah!  THis was much better!  The trench is a gap in the boulders right on the top.  They aren’t high meaning a bit of wind would whip into there as it came over the edge keeping it clear of flying pests, and it caught the sun too so we kept warm.  I started to feel a little bit of enthusiasm creeping back in.

I started on the right hand side, trying out the very low problem called Trench hole.  I pulled on easily and then realised there were no hand holds at all, just a shallow slab which I couldn’t get a grip on at all.   After a bit of faffing around and moving feet, resolutely refusing to back off, I managed to swap my feet properly so that while leaning to the right I could get my left foot into the hole.  Once here, throwing your weight back left and leg pressing hard I managed to stand up and with a push down on the slab, top out for a dainty step to the top.  Actually quite a good little problem!

Heading to the left end of the trench, I popped up Left Trench Arête which wasn’t too tough (but did have an ugly mantel at the top) and then settled into trying the harder remaining climbs.  All of these required some used of slopers which was really tough in the heat, but it was actually fun to work them a little.  We were all nearly done I think when I had one more go on Ringworm.  This one was similar to Trench hole, but instead of the hole, it had a boss stuck out for the left foot and more leg presses.   No one had really been getting anywhere, but all of a sudden the sloper for my right hand stuck and I was up on the boss.  A flurry of interest later from everyone and I’d managed another move, swapping my feet and stepping up with my left.  Next was reaching for more slopers with my leg for another leg press and this time I barn-doored away as a tried to pull up.  Damn it!   Still, that renewed all our interest and we spent about 30 minutes attempting to replicate it.  Ed managed next getting to pretty much the same place but not being able to finish it.  Kelly G followed soon after to the same point.   Liz who really didn’t expect to get up it was suddenly up there as well, much to her surprised and spent a good 5 minutes trying to do the next tough move.  Eventually she was beaten by cramp in her calves and the giggles.

In the end, no one managed it, but we all had a bunch of good attempts and eventually packed down for the return walk.  It was getting late and the sun was definitely setting.   As we headed back along the top of the crag to the car, we were treated to a magnificent sunset.  I manage to snap a lovely shot with the red sunset silhouetting some walkers sat on the top of the crag.   IN the end we had a good time. It often takes a little bit of success to turn what could have been a frustrating evening into an enjoyable one.  Bouldering is funny like that.

I’m hoping we can keep up this momentum and start to get to grips with outdoor better.  I should hopefully set us up fro Font in September much better!