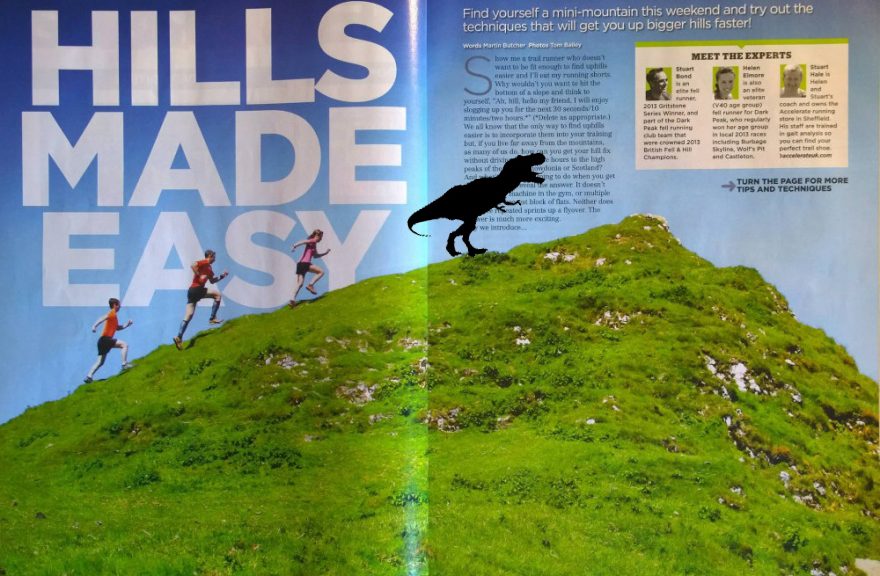 On Thursday we had the second session in our Hills Made Easy workshop with Accelerate. Both Liz and I were feeling a little under the weather; Liz having quite sore quads from running and climbing earlier in the week, and I was starting to come down with some sort of sore throat/coldy thing. Still, we soldiered on and were blessed with much nicer weather. There was a touch of wind, but once we were in the Rivelin valley and under the trees it was pretty calm feeling.

We met everyone at the cafe again, and this time were lucky enough to be part of a smaller group (Just 4 of us). Stu filled us in on the plan for the session; today we’d be focusing on downhills, but first more drills! We then went for a run to get to a good spot where we repeated the original drills and added a few more in. This was pretty comedy from my point of view as I just couldn’t get the coordination for some of then! Urk. At least I could handle the skipping 🙂

After being hammered with the drills for a bit (I was bloody knackered!) we headed off to find a big hill. We chose the one you can see Liz running up in the Instagram video on the right. Off we went up the hill with Stu watching to make sure our technique was ok and then we ran back down as our first “downhill viewing”. Out of the four of us, only Liz passed the inspection.

The rest of us were all reverting to our previous over striding form, which on the downhill wasn’t making us very stable or smooth. We went over it again and did some more repeats to try get us thinking about our foot placement.

You might have spotted a little addition to the header image on this blog post. Something out of Jurassic Park? Well, it turns out that I really don’t use my arms properly when I’m running, like some sort polyester wearing T Rex! Getting my elbows pushing out behind me because pretty much my primary focus for the rest of the evening. What I thought was really over-exaggerated arm movements, was turning out to be normal. Even more strange, when I pushed my pace up to 5k+/sprints paces, the arm movements just felt normal. I’m not really sure why I’m running like this; maybe relating to tight shoulders from climbing, or perhaps a hangover from my running when I was a youngster (All sprints, no long distance!). To be honest, it doesn’t really matter either way I just need to fix it!

We moved on to some other hills, repeating the downhills and uphills, adding in steeper ground, rougher ground, corners and some braking practice. It felt like it was all gelling pretty well to be honest, as long as I could just keep those elbows moving!

We finished off with a breakneck plummet back down to the road, and a more gentle trot back to the cafe while Stu talked about lactate testing and training before we finished off for the evening.

That’s the Hills training sessions done. Both Liz and I need to make sure we incorporate the drills and exercises into our running going forward. I’m also wondering about what next. After the next two races, I’ve got quite a gap before the next thing I have booked in: The Amsterdam marathon. All the talking about “proper training” has made me wonder about getting a bit more professional with it. I’ll have 12 weeks of training time before it which is a decent amount of time? Perhaps something to talk to Accelerate about!