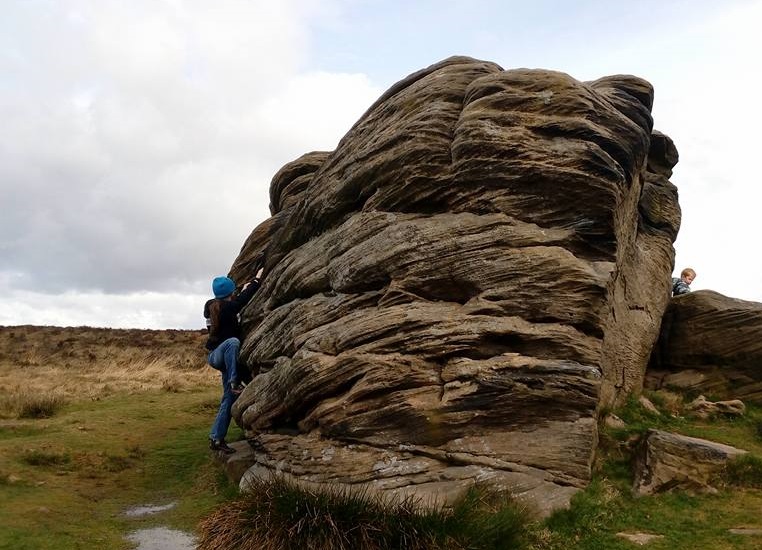 With the long weekend coming up, we blocked out the four days hoping for a break in the inevitable British weather so we could get some bouldering in, and today we got that break! A bunch of us decided to set off to Birchen Edge first thing. It’s about a 40 minute drive there, with a decent size car park just next to the Robin Hood pub. The edge is a 15 minute walk a long a reasonable trail just up the road from the pub. We headed onto the top of the edge up a scrambly path and into the wind. Pretty soon we could see the Nelson Monument and The Three Ships just ahead.

Eventually the eight of all all met up and worked around the boulders. The Three Ships are three small sized boulders with the names “Victory”, “Defiance” and “Royal Soverin” chiselled into them, named after three ships at the battle of Trafalgar. Although there isn’t anything really very difficult on the Three Ships, they are a great area for remembering how to climb on gritstone and practising sit starts.

Working around the couple of large puddles at the foot (and sometimes on top) of the boulders, I finished up almost all of the problems on offer here, only missing out “The Royal Soverin Traverse” (We’d decided to move on) and an eliminate of “Prow Right” on Victory (didn’t fancy sitting in the puddle and trying for the dyno!)

Bouldering on The Three Ships on top of Birchen Edge. Taken by F. #bouldering

Putting our shoes on, we headed down to the bottom of the edge to try out a few things down there. Next we got set up at Copenhagen Wall and climbed on “Scandiwall 4b” and then tried out “Dane’s Delight HS 5b” and “Dane’s Disgust HS 5b”. Neither of those two were particularly tough, but they did stretch me somewhat, both needing very dynamic moves because of how spread out the holds were. Next to them was “Scandiarête VS 5c”, which beat me. Just far too scary once I was on it. Those last 3 are actually in my copy of Eastern Grit, so are apparently Trad climbs, not that there is any spots for gear really! Finally, we had a bit of a play on a 7a, “The Buccaneer”, a high slab with a good looking crack in, but with nothing beneath it to get up to it! I managed the first more, pulling up and onto a poor left hand sloper, but after moving my feet up a bit was completely closed down and unable to move. Crikey.

All done, we then headed back down the track and went for a pint and some food in The Robin Hood Inn which was a rather nice steak burger with bacon and stilton. Yum.

(Photos taken by Martin and F!)