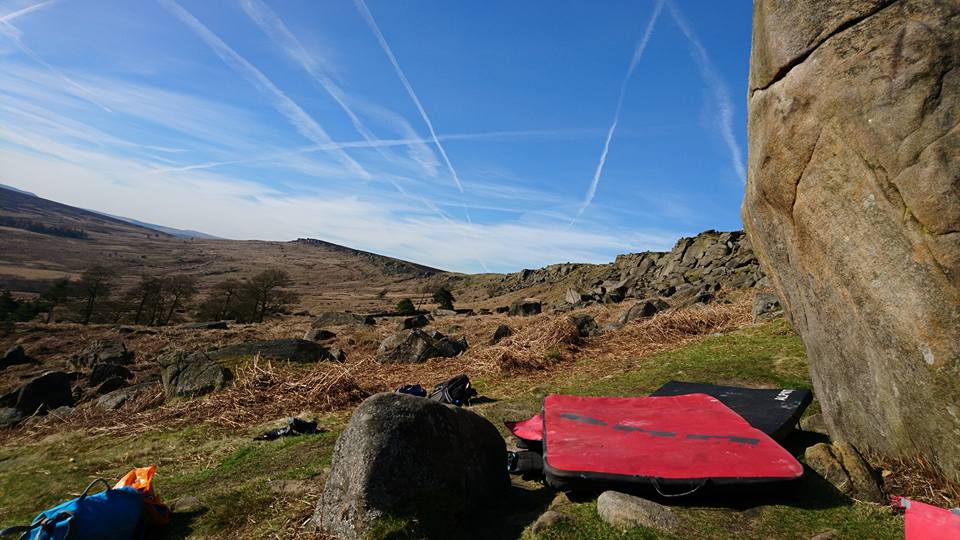 This past weekend we have GREAT weather so we went out bouldering to Stanage! We expected it to be heaving, being the first warmer weekend of the year but it actually wasn’t that bad. We even found parking in Hollin Bank car park. Bonkers.

First my headed up to the Pebble area and warmed up on the easy problems on the back of The Business Boulder. These are always a nice set of climbs to try to remember how to use real rock. Once done, we headed around the side to do No Body’s Business (always sketchy when your brain isn’t used to outdoor climbing!) and then did Slot Stand Up and followed by trying it from the proper sit start (Slot Sit down). I really can’t do the proper dyno to the flake. Instead we started from the floor and used the large left hand slot, (which I don’t think is in). Next, Big Business, which is great fun and then a quick play on Danny’s Problem (yeah, never going to happen) before having a serious go at Business Launch. Didn’t actually manage the first move, but it definitely felt possible, fingers just not catching the dyno. Definitely one to come back to next time.

Next boulder we played on was Bullworker. Doing the slab and traverse first, then Bull Flakes (standing start). I had a go on the sit start but struggle to pull hard enough to get off the ground. (Weak!). Finally, we had a look at Bullworker, which seems ridiculously burly, and needed much longer arms and legs I think! I really struggled getting my heel onto the right side to use. Not too bothered though about that one!

After a quick break to scoff most of a box of Ritz crackers, we played on Crozzle Block. Crozzle Wall fell quickly, before we piled up some mats and had a few goes on Crozzle Arête Right-hand (made possible with the extra high of the mat so the right hand was reachable. No way without them!) and flailed at Crozzle Arête. (Dyno to that? ick). We finished up Crozzle Other Arête and Crozzle Slab then decided to move on.

Putting our shoes back on, we wandered across to The Grand Hotel and the wonderful looking Not To Be Taken Away. It’s an amazing looking line, but sadly I couldn’t get off the ground. Hmm. I expect I’d bottle it anyway…! By this point, the curse of having gone back to ordinary shoes and then back to climbing shoes was taking its toll and people were looking tired. So, I decided to try one last thing…..

About 4-5 years ago, I came out to Stanage with my then lead climbing partner Jim for an evening boulder. Jim, being a brave, tough soul, decided he fancied a bit of

Crescent Arête so we set up and he started up it. He nearly did it as well, getting 3/4 of the way up before bottling it and hopping off toward the mat with us gathered around below to steady his landing on the mats but something went wrong. I think originally, there was a rock on the right of the boulder which meant the mats didn’t lay flat on the ground. As he hit the mats, they folded and slid under him, meaning he landed awkwardly and with a grimace. It didn’t look good! Once we’d got him back down the hill and to the hospital it turned out he’d broken his ankles! (Well, definitely one and possible the 2nd.) Since then, I wonder if I’d have the bottle to climb on Crescent Arête every time I used a locker at The Climbing Works, because one of them is named after it!

Being as it is right next to The Grand Hotel, it would be rude not to right? So, I had a couple of goes, immortalised in this video. Oh dear! Pulling on is easy, then you’ve got a nice flake on the left, and the arête on the right. A high step on the right up to a pocket for the left fingers and then…. guts! I didn’t have enough to really get up on that right foot. It seems to mostly be a bit of a layback and/or smear with the left foot from here. I just didn’t have the head yet. Perhaps next time?

After that, it was time to head home with sore muscles and sore skin!   Roll on the next sunny weekend!