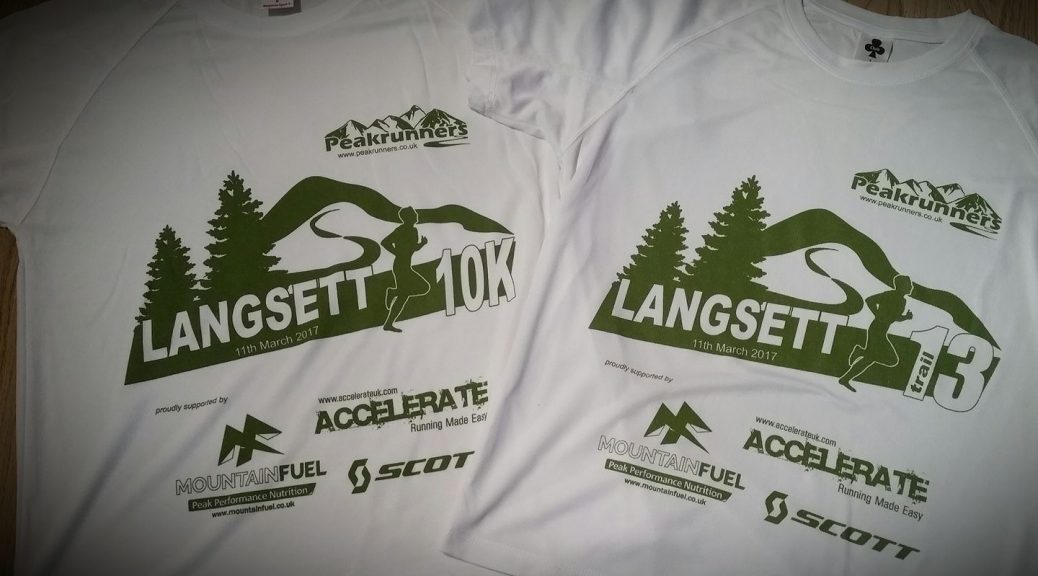 Oooh, another trail run! While trying to stick to my training plan for the Sheffield Half coming up in April, I’m constantly being tempted into races. I’m not quite sure who put me on to The Langsett Trail runs (might have been Lindsey) but being as this one was just up the road, I really couldn’t resist.

There was an option of a 10k, or 13 mile route and I opted for the 10k.  I’m not really sure why I chose the 10k over the half as I could have used it as a long run substitute on my training plan, but I guess I unknowingly wanted an excuse to run a bit harder and not suffer the consequences too much!

Planning-wise, I was at a bit of a loss as to how to run this.  Checking the route out via Strava demonstrated quite an impressive hill for the first half leaving me with absolutely no idea how to pace it. My last 10k was sub 43 minutes, but this was a trail with proper hills!  After a little bit of fretting about it during the week I just put it out of mind.  I’ll deal with it when I’m there.

On the day we arrived nice and early and registered.  The registration was in the Langsett Barn which was nice and warm.  Three big rooms, one complete with some nice looking prizes and even nicer looking cake which I made a mental note to raid later.   We hung around in there (it was slightly too cool outside in our running gear), watched people gather and caught up with a couple of other people we know who were also running. Soon the half marathon crowd had their briefing headed out, just leaving us with the blue numbers pinned to our shirts to wait for our briefing. I had the tiniest little competitive surge as I looked around the room. Could I place highly? Would all the fast people be in the half marathon? I smothered that pretty quickly, remembering my lack of plan and finally just settled properly into a relaxed attitude about it.

10 minutes later, we were lined up and ready to go. Waiting for the start was pretty cold; it was the first run since November when I was out without a base layer on, so quite a few of us were dancing on the spot. The weather had it down for 11-12 degrees but it definitely didn’t feel like it!

And then we were off!   The course was in an anti clockwise direction, taking us straight into a little incline on a hard packed trail.  I ignored my pace for a bit, just hanging onto the people around me for a bit while I found my rhythm and started to warm up.   Just after the first k, the incline started to even out and then after a little right hand turn started to descend.  The whole “how fast do I go?” dilemma appeared again and I had a bit of a mental “bugger it” moment and just let the hill take me to 5k pace.  Let’s just use these downhills and see what happens on the big uphill!

This downhill section was great.  It wasn’t too steep for most of it, letting you get everything warm and a fast 2nd k to get you excited.  Then we hit a seriously steep downhill bit of trail just before the hill.  Peaking at about -22%, it really forced me to slam the breaks on quickly, nuking any chance of any decent momentum into the hill we could see looming ahead of us.  Damn it!  And then we started to climb!

The hill.   Ouch.  It’s in two halves, the first half starting fierce and mellowing out, then a little bit of respite before the opposite, climbing again but increasing in toughness.  It was also pretty rocky, getting more and more “technical” as you climbed.  The middle of it also included mud, needing some hopping and jumping as I still wasn’t really trusting my feet in the really damp spots.  By about 3/4 of the way up I was worried I’d blown it, really starting to struggle to keep going.  This coincided with some walkers and cyclists on the path, giving me temptation to slow it up behind them and catch a breather, but they’d had a couple of people blow past them already so were wise to the runners and immediately stood aside.  Thanks… I think!

I almost went the wrong way at at the top of the hill.  The 13 continued on along the path, and I could see the red markers ahead so I pushed on, not paying attention to the marshals yelling at waving at me to turn left and start the decent.  Ooops.  This is why you aren’t supposed to wear headphones!   Finally I could catch a breather as the path wasn’t so bad for a little bit  and start to build some speed.   Someone I’d been slowly catching up pretty much most of the climb was suddenly right in front of me.  Instead of overtaking them, I followed them pretty close behind them, copying their footwork as they seemed to know what they were doing on the rocky ground more than I did!   Despite it being a nice down hill, the ground was really quite rough and wet in places meaning I lacked the confidence to push the speed back up.

Eventually I got some nerve and pushed ahead of my mountain goat friend and into a really boggy section.   The run became trying to find that balance between keeping your pace up, and finding any ground that was firm.  I was starting to feel pretty bad about using the “heathery” bits that remained along the path as it’s pretty eroded up there.  There were a couple of bits where the path diverged into two with a little heathery island in the middle.  The first that I appeared I went over the island to avoid the mud, but then realised how much of a bad idea that was because I couldn’t see what the ground was like under the vegetation.  I could have ended up stumbling over a hidden rock, or twisting my ankle in a hole or something.  Stupid move!  Next time I braved the deeper mud, and surprised myself at how well the my Saucony Peregrines gripped onto something giving me the traction I needed.   Some of the mud was pretty deep coming above the top of the shoes in places!

The last half of the downhill was fast!  A marshal pointed me around a tight right hand turn and onto a hard packed track and a fantastic 700 metres of -6% downhill.   Feeling great, I leaned into the hill and pushed my speed up beyond 5k pace.  A little alarm flicked in my head at pushing it too hard, but I was having too much fun really.  I’ll pay for it later.

Next up we swung to the left and under the trees of the little wood next to the reservoir.  This section was hard!  The trail climbed along the side of the hill, adding a tricky camber to the run and crossed lots of protruding roots needing careful footwork.  Then there was some wooden steps, just what I needed, and returned back the way we came, but just higher up the hill.  The mud was deep here, but the Peregrines kept me upright.  The wood finished with a final small hill complete with a marshal to watch me sink over my shoes into mud.  “That bit was really hard” I called out as I passed him.  “It’s not mean to be easy” he replied which gave me a laugh.

The next section was all road which put me back into my comfort zone.   A gradual climb along the road up to Upper Midhope, a sharp left and then into an amazing downhill back to the reservoir.   I got my speed back up past 5k pace again figuring if I was still going after last time I could keep it up now.  Less than 2k to go!   The hill finished at the dam at the edge of the reservoir and went flat pulling me back and I started to feel tiredness in the legs.   Just in the distance I could see a yellow jersey!  The first runner I’d seen since overtaking the guy on the downhill about 4k ago!  I quickly moved off the footpath and onto the road as the camber was really quick uncomfortable at this point and tried to try and catch him.  Reaching the end of the dam was another marshal, this time David Riley himself (the organiser).  He looks pretty happy as he directed me to the left and back under some trees.

This was the last 250 metres, a nice trail up to a right hand turn and one last hill to push up.  Half way up the hill I saw the finish and was able to summon one last push for the line and over!

Stumbling over the line and trying to find my breath I was a little confused to only see 4 other runners there.   Where was everyone else?   Suddenly I began to realise I’d placed higher than I expected!    After grabbing some water and chatting to the other finishers I headed back down the hill to wait for my friends to come in.

Once we’d all finished it was cake and tea time.  I grabbed an amazing piece of chocolate and beetroot cake (kudos to whomever made that, it was yummy!) and a cup of tea and waited for the awards ceremony.   I was very impressed to see someone I used to work with place as 3rd lady in the 13. (Congrats Caroline!) and genuinely startled at how close my time was to the 3rd placed male in the 10k!  I didn’t ask where I placed, so spent all of Saturday excitedly waiting for the results to be posted so I could see.

Check it out: I placed 7th!

Official time was 51:31, which I’m pleased with for my second ever trail race, and a hilly one at that.  I feel like I could have gone a little faster, especially if I hadn’t have done a marathon pace run on Tuesday and nearly 15 on Thursday but I’ve got to remember the real target is the Sheffield Half and not try and be on race form for every run!