Running!
Firstly, running! Lots of running! I joined the “You Vs the Year 2017” challenge which challenges you to run 1017km over the year and the #run1000miles 2017 Trail Mag challenge. I did the YVTY challenge last year and managed it, so now of the same! Last year it was tracked in Endomondo, but it appears to have moved to MapMyRun this time (which is annoying because I don’t really use it).

So far I’m doing pretty well, having covered 223km / 138miles which is nicely up on what I need to cover each month.  I guess I’m backing for the inevitable illness, injury or post race slump later in the year.   My ankles have been sore through January, but have been since my holiday back in October, but I think I’ve discovered the cause of that.  My Brooks Gelatine 13 shoes which I got midway through last year appear to have been turning my right foot outward.  As a result I’ve a big callus forming on the inside edge of my right forefoot from where I’m pushing off incorrectly.  I’ve swapped back to my older Asics Pulse 8s (which need replacing as they’ve done 1000k!) and the ankles seem to be settling down. 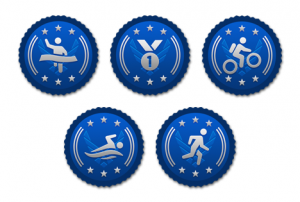 As a consequence of signing up MapMyRun, I spotted their other challenges, most notable the US Air Forces Special Operations Fitness Challenge. This beast of a challenge requires 132 miles covered by running, swimming or biking between Dec 28 and Jan 29.  Keeping to the training plan that Endomondo has cooked up for me for the Sheffield half marathon sneaked me over the line on the milage requirement (amazingly how close actually!) but I needed to ‘borrow’ a friend and his wife’s bike to get the biking badge.

Andy took me out for a ride out to a local MBT trail, which was really hard work. Absolutely no head for biking (I’ve not ridden a mountain bike for over 20 years!) and because I was wearing running shoes, any gear changing caused my feet to fly off the pedals! Still, it was great fun and got me a badge.

The final badge required me to get my trunks and goggles and do some swimming, not quite as scary as it used to be (I’m really bad at swimming!) but I managed to cover about 840 metres in less than 30mins, which I think might be a record for me.. I’m slow!

Strava badge wise, I picked up a couple.   I’m really happy to have managed the climbing challenge as I don’t think I’ve ever managed to do the 200 metres distance needed in the month to get the full badge.  Seems a bit crazy being as I live in Sheffield, but I suspect that when I ramp the distance up, I’m training and tending to avoid the hills as much.  This time I’ve been seeking them out, being as the Sheffield Half marathon is mostly just one massive hill!

I didn’t pick up the half marathon badge this time; the plan didn’t call for that distance and I’m being good.

Climbing
January has been GREAT for indoor bouldering for me. I’ve managed to go pretty much twice a week all of January, (9 sessions in total) which has seen me catch up on lots of the missing problems in the circuits at the climbing works. I’ve 5 left in the current 6a-6b Black Circuit, 4 left on the yellow circuit (5+ to “well ‘ard”) and there has been a brand new 6b-6c wasp circuit go up in the last week which I knocked 10 off last night. Hopefully in February we might have some nice weather meaning we can go out!

Yoga!
Over the last couple of months I’ve taken up Yoga! Local studio, Instinctive Health put on a “Yoga for Runners” session on Sunday nights, which I was able to fit into my schedule. It’s hard work, and hurts quite a bit, but I do feel a lot better afterwards! I’ve also been able to go during the way on Wednesdays as well. Liz seems to think that it’s been helping with my ability to do higher steps at climbing. I hope so!