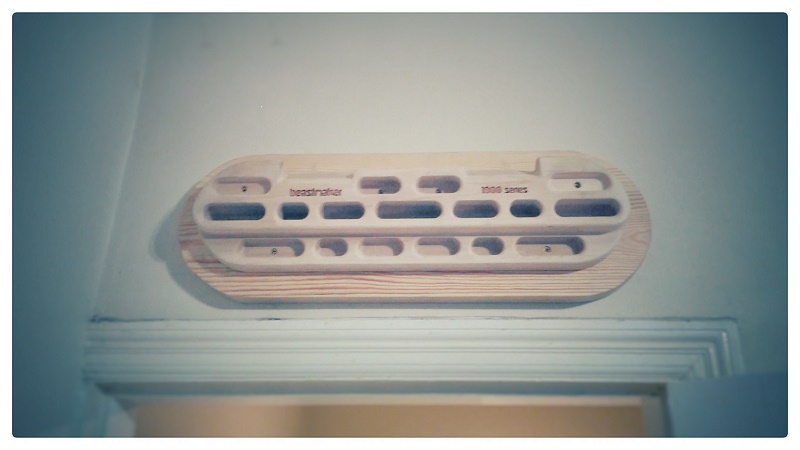 I bought a beastmaker 1000 over a year ago and never managed to get the DIY know it how to put it up anywhere. It’s surprisingly scary to attempt to fix something to the wall of your old 1930s terraced house and then decide it’s fixed well enough for you to hang your weight on. Plus, power drills are scary 😉

However, being as I was having loads of work done on my house this month, I broke and got in contact with an old friend who did building work and got them to put this up. This was a little drama filled. Initially we drilled it straight into the brick wall above the door frame, but it turned out that the weight of the house on the brick here wasn’t enough to really have compressed the bricks enough. This meant that it was good enough to use the bottom holds on, but as soon as we moved to the jugs at the top, the additional rotational force pulled it straight out of the wall. Doh!

So, we went a little more hardcore next time, using resin bolts! These things apparently leach some sort of resin into the surrounding brickwork, meaning that the bolt is anchored in a whole load of solid brickwork. Because these builds are very permanent, we added a really nice wooden backboard so if I want to change the hang board I can just unscrew it from he backboard.

I’ve started using it quite a bit, following an app I’ve bought: Beastmaker 1000 training PRO. It’s crazy how weak this makes me feel. I can only really manage “Little Boy” (level 4 out of 15) but I downgraded back to “Miss Nubile” (level 3) because I felt like it might be too risky on the old fingers.

Let’s see if I can keep this up!