Not quite as massively delayed as my post about the 2015 Font trip but still pretty late, a quick write up our next one! 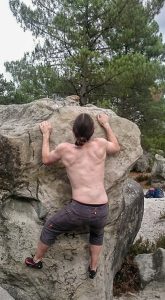 After the fun we had in 2015, we pretty quickly booked in again for the next year. After failing to get a hold of the Maison Bleau owner, we looked elsewhere and got booked into what appeared to be a Ski Chalet in Arbonne-La-Foret which was pretty much perfectly placed for quite a bit of bouldering!

Areas we climbed in:

To be honest, I was quite disappointed with my climbing on this trip. I haven’t really been able to keep consistently going to the works due to other commitments (mostly running!). As a result, was really down on my strength, and my footwork was awful:

Check me out struggling to finish a rather scary 4+ at Cul du Chien: Le Bilbo

To be fair, the top was pretty round and it was rather high!

My favourite day was actually the last day at Rocher Saint-Germain. By this point I’d accepted my lack of form and was just enjoying myself. Instead of trying hard things, instead I started picking up doing one of the easier circuits *properly* I.e. attempting to follow the route without touching the ground, following the arrows and jumps between boulders, alpine training style. It was A LOT of fun and quite challenging in places. Next time I’m there, I’m definitely devoting a day to just completing a full easy circuit like this.

Oh, and yes, I did a run while out here, with Andy: