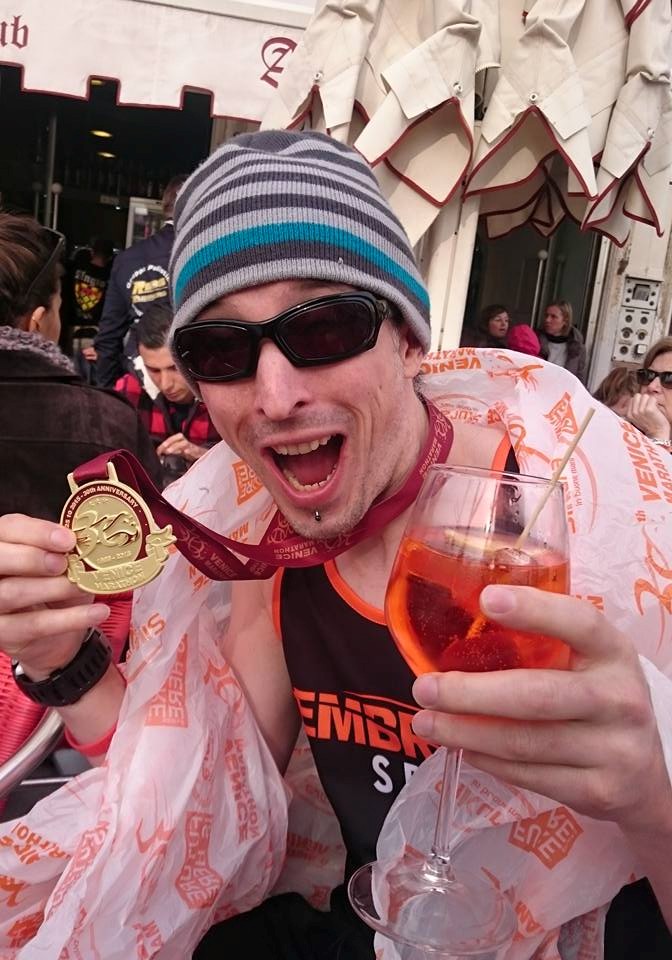 Holy Crap. Endomondo was predicting 3h:37m:59s which I wasn’t expecting to hit at all, especially with what felt like a really disrupted last month of training. I really had no idea of how to run it, so was really quite nervous.

Even worse, my left leg appeared to start going dead on me. I spent a good chunk of Saturday wandering around Venice getting more paranoid about it as I seemed to be constantly on the edge of cramp in it.

Later that evening at a meal when chatting about pace with Neil Aiken, I said that my plan was predicting me to finish somewhere between 3:30 and 3:40. His advice? Just stick with the 3:30 pacers and try and hang on as long as possible. A plan!

The race morning was the day the clocks go back, so we booked a wake up call with the hotel reception so we weren’t replying on our electronics. 6am start, so we could grab some breakfast and get the 7:10am buses which were taking to Stra for the start.

5am the phone rang. Confusion reigns. The phones said 5. Google said 5. The TV said 5. Bloody Hotel got the times wrong! Managed about 30mins more sleep before finally getting up and trying to get some breakfast in me.

The buses were very crowded, and I was stuck in a place in the bus without an easy place to keep balance and the handle was too high! This meant I could get my water out of my bag and sip it on the way! Not good for the nerves!

Finally got to Stra after an age stuck in the bus while it tried to drive the last 100 metres. Why it didn’t just let us all out so we could get in the loo queues I’ve no idea :/

Loo queues weren’t too bad, and the corrals weren’t too crowded either. I ended up in my number three corral, moved up as far forward as I could get and tried to get some stretches in.

As the other races started off, I spotted some balloons! Ah! The official pacers. Hang on, why am I behind the 4:30 pacer? That’s quite a way back from the 3:30 I wanted to keep with. I tried to push forward a bit but quickly gave up.

So, the race started and we were off! I settled into a pace just faster than 5mins/k which is what I remembered the 3:30 pace to be, but then I realised I wasn’t actually keeping up with the 4:30 pacer! Eh? Turns out these Italian pacers are crazy! Confused, I decided it might be better to just grab some early kms at a slightly faster pace to catch up with 3:30/3:40.

Fell into a nice nice rhythm eventually and I finally saw the 3:30 pacers with their pink balloons in the distance at about 6km in. However, by this point my left leg was extremely tight and sore, constantly on the edge of cramping. I was really worried I’d be dropping out with all cramped up before the 10km, so just tried to keep stretching my toes out as I was running.

Another problem? My gel belt. I’d packed 6 gels (and the 2 silly sponges they’d supplied), but I’d never actually trained with this many gels in my belt. The poor thing couldn’t handle it, meaning I was having to retighten it every 500metres or so. I’d lost both the sponges within the first 1km and was getting thoroughly fed up with it. By about 15km I’d worked out that I could loop the loose section under the belt which helped a little, and thankfully once I was down to 3 gels it was fine.

Somewhere after 15km my leg relaxed and I could start to really enjoy it. I was being swept along by the pack around 3:30 which was feeling really good. The only real gripe I had at this point was some really poor manners at the water stations with people pushing and shoving people around! I was nearly knocked over twice!

At about 22km, I was having delusions that I’d be able to keep this pace up for the full race, I was feeling so good. Sub 3:30 would have been beyond my wildest expectations. It was about 30k when I started to lose it. The San Giuliano was very tough, but dropping into the Ponte della Libertà, a 3.8km bridge was awful. It’s just a long straight road bridge with traffic running on the other side. There was a mist over Venice so we didn’t even have a great view to look at. Instead just a long, unchanging, car fume filled concrete slog.

My pace dropped here, hitting 5:30mins/k, occasionally being pushed back up when I tried to summon the energy again, but I eventually gave into it, thinking that once I hit the end and the streets of Venice with the crowds I might be able to pull it back up.

And Venice…. ugh! The first section of Venice was very industrial with very few people there, apart from some of the runners breaking and throwing up :'( It was really not what you needed after that bridge! Push on! Push On! There must be crowds somewhere?

Eventually we crossed a large bridge and we were suddenly in Venice properly! People! Cheering! Clapping! BRIDGES! Aaaagh. We crossed over 13 (I think) bridges which had their steps converted with ramps. Actually, not as bad as it could have been, until about half way. By that point I was just focused on finishing, not pace. Circling Piazza San Marco was tough, despite the crowds, but I knew I was almost there and boy was that a long last km. On the last bridge I saw the faces of the group I was with who cheered me on and I made it past the finish line with a gun time of 3hrs, 35mins, 35secs.

I slowed and tried to keep walking through the finish early, getting my medal, some photos, some hot lemon tea and tried to keep moving to find the massage tent as I started seizing up entirely. Eventually I got a massage which helped free my legs up and went to find the rest of the time.

So, why the confusion over times? Something appears to be wrong with my timing data. On my official record, my gun and chip times are identical, which can’t be possible as I was in the 3rd Corral and it took us at least a minute and a bit to get to the start. My Garmin had me crossing the line in 3hrs, 34mins. From looking at the GPS data, Strava things I did it in 3:34:03. Endomondo is more complementary giving me 3:30:31 from the same data so I’m not sure what crack that app is smoking (actually, looks close to moving time, which could be when we went under an underpass and lost GPS). My watch, which I started and stopped on the start and finishes, reported 3:34:02, which I’m taking as my proper result.

EDIT: Venice Marathon have updated my time and confirmed a chip time of 3:34:06 🙂