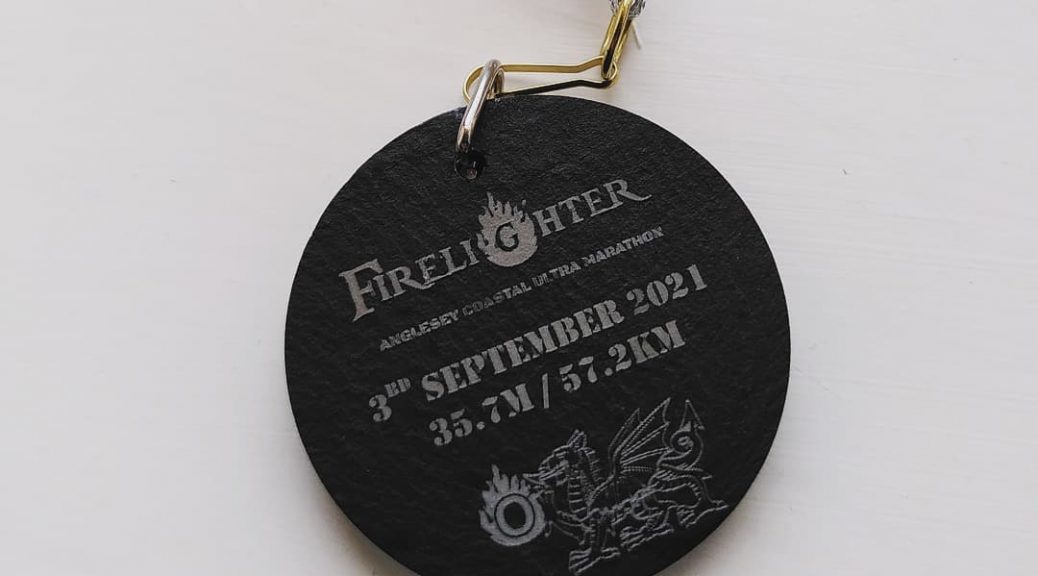 An interesting choice for my first ultra, but I signed up to run it with Liz who had chosen it as a target crazy race.

We both had a very disturbed year of training leading up to it with injuries getting in the way of us doing the consistent number of long runs I’d intended to build the fitness. With Liz’s runners knee flaring up, I refocused her on practising using running poles which turned out to be a very good idea!

We got through the first two CPs (11k and 26k) bang on schedule although Liz’s knees were beginning to hurt due to the shingle breach running.

The next section between CP 2 and 3 was a killer with loads of steep up and down hills meaning you could never get a proper run going, not that Liz’s knees would really let her. She persevered though, run walking consistently and using the poles well.

We spent half of this section with the ominous looking Wylfa nuclear power station in the background, which was our next check point. Always almost there, but never close enough. As we ran along the crescent of the shingle covered lagoon edge at Cemlyn Bay we realised that at this pace we weren’t going to make the cut off at the next check point.

Pushing onwards we had a chat and decided that I should push on and see if I could make the cut off. The problem was that by this point, I didn’t know how far away the check point actually was and had 20mins to get there by cut off. Eek. Engage fast mode!

Made more complicated by the road seemingly not resembling my gpx file at all (or I just couldn’t see the turn offs) I was probably doing sub 25 min 5k pace, which was bloody surprising 38k into an ultra. Entering a rather tough little wooded section, I passed Andy who have me some rather important instructions as I’d have got very lost running through there, and peaked at about 4 mins per k as I blasted down a hill to a road before turning into the check point. Turns out I had a bit more time than I realised…

I took ages getting my pack sorted in the hope that Liz might make it, but eventually set off for the final stage feeling ok. That didn’t last that long, probably 5k, before the huge staircase like climbs crushed what energy I seemed to have left. I think the speed burst really did me in.

I’d grabbed my poles at CP3 and they became essential, using them pretty much all the way to keep me going, especially on the really tough climbs. I caught up with and overtook a number of the people we’d been leapfrogging earlier but who had left us on the way to CP3, and ran with a couple who seemed to know the way pretty well.

As it got really dark I fell in with a bunch of three lads who were jovially run walking. We got talking about the route and somehow got on to point that I had the gpx route on my watch. I then realised that the Eta on the watch was showing 21:55, meaning we only had 5 minutes of leeway on our average pace before cut off. Eek!

That sobered the mood up somewhat as one of the lads was doing the full three day and had to meet the cut off to continue. Our running became very hard then, especially with the still tough terrain and quite scary cliff edge sections when feeling very wobbly.

I overtook them for a bit and lost the path completely, heading straight forwards when I needed to head left. When I realised, I took a very risky gamble continuing on but heading diagonally in hope of meeting the path again. It worked thankful, but not without a cost as I had to push through a large prickly gorse bush and stumble down a small cliff edge. Phew!

I was flagging now though and they caught me up as we completed the seeming unending cliff path to Bull Bay. A bit of road here where we spotted Andy on his bike which was a welcome distraction from the running on fumes feeling I had. Turns out it’s really hard to keep eating and running when you’ve got a pole in each hand. He stuck with us till we turned off the road back onto the cliff paths again.

It was now like a forced march, one eye on the path lit by my head torch, the other on my watch as I flipped between the breadcrumb trail and the ETA screen which by this point was bouncing between 21:56 and 21:58. I figured this meant we have no chance to slack off at all as I was running slightly slower now than the overall average. Ugh!

Eventually we caught up with another group who suddenly called out ‘the flag!’. Ahead of us we could see the flag for the final honesty book so followed the path ahead towards it… Only for us to twist gradually away from it. We’d missed the turning!

Rather than going back, we pushed through the brambles and gorse and jumped a small wall to tear a page out of the book. Almost there! Not far now!

It was just a last dash through Amlwch Town when I realised the group ahead of me who I was following was running the wrong way. Thank god for the gpx breadcrumbs. I stopped and the lads from earlier stopped with me. Before we turned back, we yelled to the group disappearing in the distance to get them to turn back and tried to correct our mistake.

Back on the right road an older fella wearing tracky bottoms, a jumper and running shoes appeared out of nowhere and bombed it off ahead of us. Suddenly he stopped and gestured for us to go through the hole in the wall and along the grass. Oh! Thanks random man!

This was it 20m or so and the finish but there was a final sting… A 2-3 meter hump! Bloody hell, haven’t I done enough hills today?

Done! And in a few minutes under the cut off. I still have no bloody idea how.